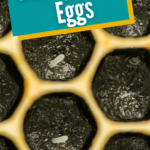 A large colony of honey bees can easily reach over 60,000 members during peak season.  But even the strongest hive has humble beginnings.  Each member of the colony began as an egg – a bee egg.  Much different in size than the chickens’ eggs we are all familiar with but alike in some ways too.

Most mammals give birth to live babies.  But birds, turtle, fish, reptiles and insects lay eggs.  Honey bees are insects.  They have 3 distinct body parts, 6 legs, and 2 pair of wings.  Most importantly, they go through 4 distinct stages in their life cycle.

The egg is the first step followed by larva, pupa and adult. Every member of the colony must pass through each stage. However, the time spent at each stage varies among the kind of bee.

A honey bee egg is very tiny.  In fact, it takes new beekeepers some time to learn how to recognize eggs in new comb.  They are not easy to see but a magnifying glass helps.

I often tell new beekeepers in my beginner’s class to look for tiny pieces of white thread.  They are a pearly-white color and somewhat oval in shape.

Egg size can vary a bit but doesn’t seem to have an correlation to quality of the adult bee. Mark Winston, in his book – The Biology of the Honey Bee, has some interesting thoughts on this.

A queen normally lays only one egg in each beeswax cell.  Fresh eggs are glued to the middle of the cell and stand upright. Over the next few days, they gradually sag towards the bottom.

Lacking a true shell (as we know it) the surface of the bee egg is covered by a membrane called a chorion.  Unlike some eggs that “hatch” by breaking of the shell, the chorion of a bee egg dissolves after about 3 days.

However, everyone I know still refers to the process as the egg hatches. Unless you are a researcher, I doubt it matters – don’t get hung up on semantics.

Once that happens, the insect is entering the second phase of development and it is now called a bee larva. Nurse bees then consume pollen this activates special glands in their mouths. Now, they can produce royal jelly and other types of brood food to feed the developing baby bees.

Two Different Kinds of Eggs in the Hive

Inside a bee colony you will find 2 different types of bee eggs.  Both fertilized and unfertilized eggs can be laid by a queen bee.  She chooses whether or not to fertilize the egg with semen stored in her body as it is laid.  Fertilized bee eggs become females and those that are not fertilized become male bees or drones.

How does the queen make this decision?  The needs of the colony (as well as time of year and other factors) determine which type of egg is produced.

Even though the role of the queen bee is primary egg layer, she does not make all the colony decisions.  She will only lay in honeycomb cells that the workers have cleaned and polished!

During peak season it is not unusual for queens to lay 1,000 to 2,000 eggs per day.  The number depends on colony size, incoming food and the quality of the queen.  Younger queens are usually the most prolific layers.  Production tends to slow down as the queen ages.

Members of the Colony that Lay Eggs

Only 2 members of a colony have the capability to produce eggs. I am referring to the queen and the workers. Unfortunately, only one of the two is a viable choice for the hive.

The queen is the only member of the hive that can lay fertilized eggs.  These are the eggs that develop into female workers or even a new queen bee if one is needed.

Reproduction in honey bees involves a mating ritual.  A virgin queen leaves the hive on her mating flight. She finds male bees that are “hanging out” in a drone congregation area.

After successful mating (with several drones), sperm is stored in her abdomen. A special structure called a spermatheca, keeps the sperm alive until it is needed.

This only occurs when she is very young and will not be repeated again. If the queen lives long enough to use up her stored sperm, she will not longer be able to lay fertilized eggs!

This normally results in the workers killing the queen and making a replacement before the queen fails completely. If few fertilized eggs are available, the colony must use what they have and the queen may be inferior.

The majority of members in the hive are female workers.  They are responsible for all the work that is done to support the hive.  They are also the defenders of the hive.  While they do have rudimentary ovaries, worker bees can not mate.  Therefore, they are unable to lay fertilized eggs.

In time of severe stress, when a colony has a failing queen or has been without a queen for several week – workers may begin to produce eggs.  These are called laying workers.  This is a death sentence for the hive without beekeeper intervention.

The resulting bees will all be drones and no new queen can be made without fertilized eggs.  A colony without a queen will fail in a couple of months.

Eggs Located in the Brood Nest

Once eggs transform into larva, the workers in the hive have a lot of work to do. Bee larva grow very fast and require constant feeding and attention. They also must be kept within an optimal temperature and humidity range for good development.

Therefore, all of the developing young, called bee brood, are found in a central location of the hive. The beekeeper inspecting a colony learns to look in the brood nest area.

During the cooler times and Winter months, other members of the colony will gather or cluster together surrounding the brood nest.

Developing an understanding of what is or is not normal in the hive is very important. Beekeepers must continue to examine the brood pattern throughout the warm season. Any signs of disease or major problems must be addressed.

They are tiny white thread-like objects that have an oval shape. Some people say they look like tiny grains of white rice.

No, workers can not mate and store sperm in their body. They can not produce fertilized eggs.

Can bees lay eggs without a queen?

Worker bees can lay eggs but all will develop into male bees or drones. The colony will fail.

How big is a bee egg?

Where to bees lay eggs?

Honey bees lay eggs in a central location of the hive called the brood nest. They are laid in beeswax cells called comb.

They are many variables involved in the super organism that is a honey bee colony. The time that bee eggs hatch can vary as can every stage of development.

With hard work and a little luck, thousands of these tiny “thread-like” eggs become viable field bees in about 21 days. Then, these bees collect all the resources needed by the colony to prepare for the cold Winter months. From the tiniest beginning, grows a strong hive of honey bees able to care for and defend itself.