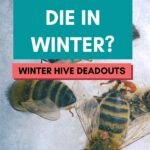 Bees are a common visitor to our Summer gardens and not so much as the temperatures cool. For beekeepers, it is common to worry about the hives over the cold months of Winter. There are many reasons that bees die in Winter. Some of these factors are simply nature’s way of continuing the species. Not all bees are the same. In honey bee colonies, Winter losses are common – more so than we would like.

Why Bees Die in Winter

Honey bee colonies are supposed to overwinter as a colony. For the beekeeper, finding a hive of dead bees in Winter is no fun at all.

When a colony fails, the beekeeper loses the money and work put into it, as well as, the hope for future rewards.

Sometimes, we just find the hive empty with no understanding of what has happened to our colony. The feeling of failure can be so great that many beginning beekeepers give up. They want to know why their bees died and if it was their fault.

The possible causes of hive death are many. Unhealthy colonies due to varroa mite infestations, lack of enough stored food and cold temperatures are some of the top issues facing the beekeepers. Yet some causes are difficult to diagnose.

Thankfully, not every bee dies with cold weather arrives. Various insects have different ways of surviving the Winter cold and the time with a lack of flowers. In fact, Bumble Bees and Yellow Jackets do not survive the cold months as a family.

Instead the mated queens live by hibernating in garden debris. All other members of the family die when cold arrives.

Next Spring, the queen comes out to start a new colony. This is only one difference between bumble bees and honey bees.

Insects can share many characteristics and still have some important differences. Their annual life cycle, diets and types of nests are all different.

The same is true for many solitary bees that hibernate in cold climates. This is why some will live to see Spring while others do not.

For honey bees, living together in a large family is their method of over Wintering. Yet, even within a healthy colony, not every bee will live from October to April. Throughout the cool months, some bees will die every day.

On warm Winter days, house bees throw the dead bodies out of the hive. This can be alarming to a new beekeeper going through their first Winter with a beehive.

But, seeing some dead bees in the snow in front of your hive is no cause for alarm. This could just be a symptom of good housekeeping.

In general, a beehive should not die during Winter. A healthy colony of honey bees with ample food stores should live from one season to the next on stored honey.

Honey bees “born” in late Fall are special. These fat Winter bees can live for up to 6 months – much longer than the normal 6 week life span for the Summer bees.

On average, a healthy beehive with good honey stores should be capable maintaining bees in residence until April. Then as the older bees die, new bee brood will be able to replace them and grow the colony population.

In recent years, the percentage of honey bee colonies lost over Winter has grown. Our colonies are struggling to deal environmental issues as well as new bee pests.

Honey Bees Do Not Hibernate

Honey bees colonies do not enter a hibernation state. At least not in the way we think of true hibernation.

Instead, they cluster together inside the beehive. They have an amazing way to survive winter by consuming stored honey and generating heat.

You may not see much activity from the outside. But, the bees in the hive are working together to survive.

Those colonies that come through Winter in good shape are highly valued. Perhaps, those bee genetics are some that we want to keep in our apiary.

Extreme cold temperatures play a role in the death of some Winter beehives. In regions with long Winters and frigid temperatures, beekeepers learn how to prepare their colonies for Winter.

In most regions of the US, this is not a big problem. A healthy colony with a good population of workers and enough food can ride out the cold months. They do this by forming a cluster that is able to keep temperatures to a sustainable level.

Honey bees are cold blooded insects. If their body temperature drops too low they become sluggish and unable to move.  Unless the bees become warm quickly they will die.

Honey bees form a “cluster”. Thousands of bees that move close together in the hive – creating warmth by moving their flight muscles. Their shared body heat is able to warm the cluster enough to sustain life.

Also, they must have enough honey stores near the cluster to survive. If the clustered bees can not or will not move to stay in contact with food – they perish.

They will starve in place on the comb. Yes, your bees can die with a full box of honey on top but just out of reach.

This situation happens more often in times of severe cold – or a polar vortex that crosses the country and swings far to the south. Warmer days allow the cluster to reform near food. Days of extreme cold may prevent cluster movement.

Because honey bees reproduce in a cyclic manner, colony populations will vary due to time of the year. Larger populations in the Spring and Summer will fall to smaller Winter populations.

This is normal bee behavior and mostly related to the genetics of the hive. Some breeds of honey bees over Winter in a larger cluster. A large bee population is an asset to creating heat for survival. However, they will need more food to last until Spring or face starvation.

A colony with a very small population, faces the risk of the bees not being able to survive Winter’s cold temperatures. During cold snaps, some of the bees die on the outside of the cluster. If another cold snap arrives right away, the colony is trying to survive with fewer bees than before.

How Many Bees Do You Need in a Hive for Winter?

Bee genetics and colony health play a role in the cluster size needed to keep the colony alive. Also, it depends on how low the thermometer drops and the duration of cold. Each hive is different.

The beekeeper’s goal is to have a good population of healthy worker bees – -going into the cold months. An unhealthy marginal size colony going into Winter is a dead-out waiting to happen.

More colonies die from starvation in Winter than any other cause. Do I mean that the bees did not have enough honey to last during the season? Yes, that is often true.

But, a honey bee colony can starve to death with boxes of honey on the colony! As stated above, when the bees fail to move and stay in contact with food they may die.

A larger cluster has the energy to move at cooler temperatures than a small cluster. If a prolonged cold wave prevents the bees from moving to food, they become unable to generate heat and freeze.

Even though they did succumb to the cold, it is a lack of food that caused their deaths. So starvation is the culprit.

Why the Cluster Does Not Move

In addition to very cold weather and a small population, there is another reason bees may not move to food. If they have brood or bee larvae in the center of the cluster, they will often NOT leave the brood to reach honey.

What can a beekeeper do? We can not control where the cluster moves – or not. However, we can make sure our colonies are well fed before Winter. They should be healthy and have a good population.

The beekeeper may also make candy boards for the hive or employ other ways of feeding emergency sugar.

Condensation Kills Bees in the Hive

Some regions have more problems with hive condensation than others. This is another instance when your climate plays a role in your colony management.

A cluster of live bees, eating honey and generating heat, gives off moisture. The warm moisture rises to the top of the hive. If the temperature is very cold outside, moisture can condensate on the underside of the hive top.

This causes water to drip down on the bees.  Most of the time bees can cope with cold temperatures. But wet, cold bees are dead bees.

Some beekeepers use quilt boxes and other strategies to absorb excess hive moisture.  I have not needed to do that in my area.

However, it may be something to consider for your hives depending on where you live. Paying attention to good beehive ventilation is important year round – not just during the hot days of Summer.

Not all beekeepers need to wrap up hives during Winter. But, if you live in an area that requires hive wrapping, be sure to allow for good ventilation. Even a Popsicle stick on the top box will raise the outer cover up just enough.

Keep in mind, we are not trying to keep the inside of the hive warm. We want to give the healthy colony a draft free space to live in during the cold of Winter.

We can not control all aspects of beekeeping. But, here are some tips to help reduce winter losses.

This is where I rely on my beekeeping journal and notebook.  I may not remember what I did in each hive for Winter prep but my notes will remind me.

In the insect world, some types of bees do not die in Winter. Their queens live to continue the family line in the next season. But, in the case of honey bee colonies, nature intends for the colony to remain intact as a unit throughout the year.

Not every bee will make it through Winter. However, the colony as a whole should be able to replace dying bees with new members and continue to grow the hive in Spring.