What Is A Beehive? – Where Bees Live

A Beehive is a Home for Honey Bees

What is a beehive? It is the place a honey bee colony calls home. The bee family may occupy a man-made wooden box or an empty hollow log. The ability of bees to find new places to build their hives is one of the many fascinating facts about honey bees. If conditions change or the colony outgrows their current location, they will search out a new hive to call home.

Specific images may come to mind when you think of a beehive? But, what is a beehive exactly?

In the largest definition, beehives are either natural or domestic. Though we will never truly domesticate bees – we do build hives for them.

For most people, the term beehive refers to the actual box that beekeepers provide for bees.

Yet often, when we say beehive we are talking about not only the physical location-but the bee family that lives inside too!

Bees that Live in Beehives

Bees from the subgenus “apis”, such as our honey bees, live in beehives. In some parts of the world, there are bee species that build open nests.

However, in most regions – the honey bee nest will be inside an enclosed cavity. Here, the bees carry on all the life sustaining activities of honey bee life.

A simple view from the outside of a beehive gives no indication of the magic happening inside. In fact, during Winter the hive may seem dead – but the bees are snuggled inside.

With enough stored food and good health – the colony can hunker down and live out the cold months until Spring arrives again.

Where Do You Find Beehives?

In nature, you will often find honey bees that have created a beehive in a hollow tree. When a colony lives in a tree, beekeepers in my region of the country call it a bee tree and if the colony and part of the tree is harvested a -“bee gum”.

A tree beehive may contain a colony of bees for years and years. Of course this was before the influx of a honey bee pest known as Varroa Mites. Mites wiped out most of the feral bee population several years ago.

While it is not impossible, it is uncommon to find honey bees nesting in the ground. Ground dwelling bees often end up being Yellow Jacket Wasps– not bees.

Also, not every type of bee that lives in a tree is a beehive. Hornets nests are often confused as honey bee hives. They are not – do not try to collect any honey from a hornet nest!

But, bees don’t have to live in trees. They may move into an empty wood or plastic box.  The inside of an unused gas grill can be home to a colony of honey bees.

Sometimes bees move into structures that conflict with the desires of humans.

Homeowners do not like to find a honey bee hive inside the walls of their home. (A good reason to caulk any openings to the outside.)

Bee Homes Made by Beekeepers

Beyond natural hive locations, there is another common type of bee home. This is a man-made box used by beekeepers. There are several different types of beehives.

The term apiary is used to describe a group of hives in one location. A beekeeper may have a couple of hives or many in one central location.

Having the hives closer together makes for more efficient bee management. However, grouping many hives together increases competition for foraging. We don’t want to place too many colonies in one location.

Modern beekeepers use several styles of beehives. But, the most common is the Langstroth hive developed in 1851. This hive design features honeycomb held in a wooden frame.

Using the principle of bee space, this hive design revolutionized beekeeping. Bee space (commonly referred to as 3/8”) is the space that bees will naturally leave between sheets of honeycomb.

They also leave this space around the edges of combs as a dead-air space for insulation. The removable frames of a Langstroth hive facilitate hive inspections.

The honey bee queen lays eggs in the bottom boxes of the hive. This is the brood nest area. Honey and pollen is stored in cells near the brood nest. This make it easier for nurse bees to feed the young.

The top boxes of a hive stack may contain excess honey for the beekeeper. These boxes used by beekeepers are called supers.

The honey harvested should not rob the bees of their Winter food. Only extra honey beyond what the bees need should be taken.

What Is a Beehive Made Of?

Honeycomb made from beeswax is the second component of a hive. Sheets of honeycomb containing thousands of individual wax cells form the backbone of the hive.

In these hexagon cells, bees raise young bees and store food for Winter. The colony could not survive without the honeycomb sheets.

Inside the Bee Hive

Rather than the external surface, which could be a tree, wooden box etc, let’s consider the inside of a hive.

A beehive is a family of bees and the resources they need for survival.  The interior of the hive area is coated with sticky bee propolis.

Propolis is a mixture of plant resins, beeswax and saliva that has anti-bacterial and anti-fungal properties. It is used to seal cracks and contributes to beehive health.

An excess of propolis makes hive inspections more difficult for beekeepers. The boxes and frames will seem to be glued together. However, it is thought that more propolis inside may mean healthier bees.

Honey bees make beeswax from wax glands on the underside of their abdomen. Building comb requires a lot of effort by the honey bees.

Inside wax cells, bees make and store honey to be used over Winter. Also, pollen is converted to bee bread and stored until it is needed by the colony. Wax cells are also used to hold developing babies called “brood”.

Yes, beehives are thought of as living things. Because of the social structure of a honey bee family, a colony is consider a “super-organism”.

Inside the hive, individual bees go about their daily tasks – however, the hive as a whole organism can grow and prosper or become weak and die. The combined efforts of the social insect known as honey bees make this possible.

Final Thoughts on the Beehive

The beehive is a dwelling place for bees and everything located inside. It may be the inside of an tree or a man-made box.

Beehives are where the magic of the bee world shows off its best efforts. This industrious little insect fights to survive against all odds in the big wide world. To learn more about honey bees, be sure to read – Amazing Honey Bee Facts.

What is Sourwood Honey?
Next Post: Africanized Bees – What You Need to Know 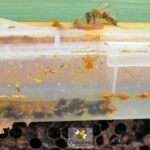