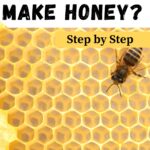 One special little insect is known for it’s remarkable ability to produce a sweet substance we call honey. The ability of bees to produce this long lasting food source is key to their survival. It is the main source of energy for these hard working insects. So, how do bees make honey? The story of how they accomplish this feat is a good one.

Most of the insects that make produce this sweet substance are honey bees – Apis mellifera. Members of the genus “Apis” -the full scientific name is Apis (meaning bee) and mellifera (Latin for “honey bearing”).

This scientific classification includes a diverse group of insects that includes, bees that nest in cavities, dwarf bees and giant honey bees. Most of these insects originated in southeast Asia.

And, all of them are social insects that live in large colonies. The Eastern Honey Bee (Apis Cerana) is still managed by beekeepers in parts of Asia.

The most well-known is the European Honey Bee (also called Western Honey Bee). These are the ones found in the United States and many other parts of the world. There are several races or types of bees within this group.

However, most bee species do not produce this sweet substance. Among the thousands of different types of insects in the world, most are solitary. They don’t need to store large amounts of food.

While some species of insects do produce a bit of a sweet substance, none produce large amounts. Only insects in the Scientific Genus Apis are true honey producers.

How Honey is Made – Step by Step

Female worker bees are responsible for food gathering and production. These are the older adults and they are called forager bees.

Using her proboscis (or long tongue) to form a straw-like mouth structure – she sucks up the liquid found in the plant nectary. This is the parts of a plant that produce sweet nectar.

A worker has a special organ located in her abdomen directly before her natural stomach. This second stomach is called the bee’s honey stomach (or crop) and is used to collect and transport nectar.

In the bee’s crop, nectar mixes with enzymes produced by special glands in the mouth or head. The complex sugars of raw nectar begin to breakdown into more simple sugars. This is the beginning of the inversion process.

When her crop is full, she will return to the hive with her bounty and give her load to a house bee.

2. Honey Produced Inside the Hive

House bees, that are not old enough to forage, receive the incoming plant nectar from foragers. As the nectar is passed from bee to house workers more enzymes are added.

The watery nectar is manipulated within their mouths-adding an enzyme called –Invertase. As the process continues, the Ph and chemical composition of the nectar is changing. Glucose oxidase (another enzyme) is added along with the saliva.

As more sugar molecules begin to change form, gluconic acid and hydrogen peroxide are produced. These give honey its acidic and antibacterial properties.

Now it is time for the dehydration process to begin. Plant nectar is watery and the excess water must be removed.

House bees constantly manipulate the nectar. A drop of ripening nectar may be seen on her mandibles (jaw). (Similar to us blowing bubbles with bubble gum). Exposed to the warm, dry air inside the hive, the moisture content begins to drop.

Nectar that is in the drying (or moisture reduction) process may be placed in droplets along the surface of comb and moved several times.

Bees fan with their wings to increase air flow through the hive. This aids in further lowering the water content of the nectar.

When the moisture content of the honey has dropped from about 80% to 20%, we consider the transformation to be complete.

Honeycomb cells are used to hold the stored food until it is needed. Each ripe honey cell is capped with beeswax to keep the food clean and safe.

Each bee colony contains sheets with thousands of hexagon shaped cells. During the long cold Winter months, this stored food will sustain the colony.

What do Bees Use to Make Honey?

An individual bee makes only a small amount of honey during her lifetime. But, a forager may visit up to 5,000 flowers in one day.

Plant nectar is the primary ingredient used by bees to produce honey. However, it is not the only sweet substance they collect.

Sometimes, they collect a sweet secretion of aphids called “honeydew“. The resulting product is called “Forest Honey”. The idea may seem a bit off-putting but in some countries it is a highly sought after product.

They do not use pollen to make honey. However, bees do collect pollen. It is a vital protein source needed to rear babies or young.

Why do Bees Make Honey in Abundance?

Why do they store food inside the hive in such great quantities? Unlike many insects, including wasps etc, honey bees do not build seasonal nests that are abandoned once cold arrives.

Some members of the colony are living in the hive all year. When cold temps arrive, they are unable to fly and look for food.

Colony survival depends on sufficient food stores before Winter arrives. And with some luck, the beekeeper may get a share as well.

Why not just store the plant nectar in the comb? Watery nectar would spoil, ripe honey remains edible over the long months of storage. Many different factors affect production. In a good foraging location, an average colony can make 60 pounds of excess honey or more in a season.

How They Find Nectar Sources

How do they find nectar sources efficiently? Some will serve as scout bees. Their job is to search out food sources for the hive. They also aid in finding new hive locations during the swarm season.

Upon finding a great field of nectar, scouts return to the hive and use a special bee dance language to tell their sisters!

For most regions, honey production is not a year-round thing. The colony may collect a bit of nectar at non peak times but not in sufficient quantities for a beekeeper to harvest.

No it is not – that is an ugly myth. A special structure inside the bee -called her crop holds the collected nectar. It is different from her regular digestive system.

If she is hungry, she can open a special value and allow some nectar into her real stomach. The collected nectar is not in her true stomach.

Why don’t all bees make honey?

Bee species that live as solitary individuals do not need to store food. These insects do not have large families to support.

Their goal is simply to feed and raise a small number of young. They do not overwinter as large families so large stores of food is not necessary.

Most of the bees in the world are solitary insects. Therefore, most bees do not make honey.

Wasps are not bees – though to the untrained eye they are sometimes thought of as bees.

No, wasps (and Yellow Jackets) do not make honey. Though these insects are relatives of our bees, they are primarily meat eaters.

Wasps will certainly enjoy stealing a sweet taste of anything, much like your soda at a picnic, but sweet food is not their primary diet.

How much honey do bumble bees make?

However, because the bumble bee nest is small and does not overwinter as a family, the amount of honey produced is very small.

Is blue or purple honey a real thing?

Yes, in some areas of the Southeast beekeepers do harvest a bit of purple honey. The reason for the color is a subject of debate in the beekeeping community.

Can we make honey without bees?

A group of Israeli students came up with a procedure to make a synthetic honey substitute. But, it is not real honey-that can only be produced by bees from plant nectar.

Is all honey the same?

Sometimes beekeepers place hives in large fields of a single nectar source, such as Orange Blossom. This is how we get a different types of honey with a variety of flavors and honey colors.