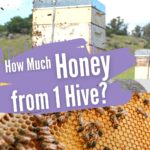 While there are many reasons for keeping bees, most beekeepers have a desire to produce their own honey.  What could taste better than a jar of delicious honey from your own backyard hive? A common question asked by new beekeepers is how much honey per hive should they expect. The best answer to this question requires some thought.

How Much Honey Can a Beehive Produce in a Year?

Perhaps you are under the impression that bees make honey all year.  Unfortunately, that is not true in most locations.  A colony of bees can only collect nectar when it is available and the weather is suitable for flight.

When we consider how much honey one beehive can produce in a season, the best data we can hope for is an average.  Some beehives might produce 120 pounds while others make much less or none.

A common average honey production of 60 pounds per hive is often used.  This is excess or surplus that the beekeeper can collect – over the amount needed by the bees.

For those of you new to beekeeping terminology, 60# (lbs of honey) is about a 5-gallon bucket full.  Pounds are used when selling honey instead of number of jars. Either way – that’s a lot of sweetness for a family.

While we appreciate the wonderful gifts from the hive, bees do not make honey for us.  Instead, their method of food storage is a survival technique.

The Winter season is a quite time in the hive. Instead of hibernating, the colony overwinters inside the bees nest during the cold days.  Sure, they may fly a bit if it is warmish outside but they depend on stored food. Few flowers bloom in Winter.

Early Spring signals a time when a lot of nectar is available. Millions of flowers burst into bloom and lure pollinators in with sweet nectar and pollen.

Hungry colonies get to work gathering it as quickly as possible. Some will be used to feed – brood (developing bees) and some will be placed in storage for later.

By June or mid July, beekeepers in some regions will be done with surplus harvest. My bees make very little honey after late June. While some areas do have a late Summer or Fall nectar flow, this is not true for all locations.

Know conditions in your region. Otherwise, you may harvest all the Spring crop and leave your colonies to starve. I have seen this situation happen over and over again with student in my beekeeping class.

Don’t over-harvest, especially if the time of the honey flow is over for your area. Sugar water is not honey – bees need complete nutrition.

Any colony that fails to store enough food for Winter is at risk of starvation.  Each individual bee makes a small amount of honey. The bee family needs thousands of workers to get the job done in time.

Therefore, bees instinctively make and store as much food as possible. The amount of stored honey needed by an average colony depends in part of where they live.

Hives located in the deep South can survive on 40# – while those located in the northern areas of the county will need up to 90#. A common average of 60 – 80# is the recommendation for those middle regions.

Once you know the bees are well provisioned, it is your turn. Harvest the excess honey not needed by the bees.  Good beekeepers learn how much the colony needs to store for Winter and only take the extra.

The wide range in honey production among beehives is due to several variables.  Each of these conditions has a direct effect on production.

Location of the beehive (and climate) plays a large role in how productive the colony.  If the bees are located in an area with millions of nectar rich flowers, they have plenty of resources.

By contrast, any hive that has to fly far distances to collect nectar is not able to make as much honey.  Time and energy are expended on flying to the nectar source and back to the hive.

How large is your colony population? It takes thousands of workers to bring in a good harvest. What about colony health?

Healthier colonies are better workers.  This should be no surprise.  A colony that is plagued with parasites (such as varroa mites) will not be as productive. Nosema and other diseases reduce production too.

“Survival of the fittest” is a term used often in reference to things in nature.  Strong colonies will rob weaker hives.  This is activity can happen any time during the season but is more common during times of nectar dearth or shortage.

Good or poor hive management practices by the beekeeper can affect the harvest. Adding another honey super to give the colony room to work is important for maximum production.

Weather is one of the major players in determining how much honey a hive can produce in a year.  Imagine a large beehive in sunny, warm Florida.  So many days of wonderful weather when bees can fly and collect resources for the hive. But, bees do not fly in rain – at least not as efficient foragers.

Weeks or rain or high winds can wreak havoc with a beekeeper’s dream of having a good crop. Thousands of worker bees have to sit in the hive and wait for the weather to clear.

Size of Your Apiary

With all the variables involved in determining how much honey bees can make, coming up with a hard number of hives you need is difficult.  Also, most beekeepers do not have hives of equal strength in the bee yard.

Strong hives often swarm at the most inconvenient times (for the beekeeper).  It is not unusual to have one colony going strong and one sitting right beside it that is not doing well.

How many boxes of honey can you expect? This depends a bit on your hive set-up. Collection boxes have removable frames inside. Though the smaller boxes are more common, any of the boxes can hold frames of honey.

How much honey is in a frame? A deep frame yields about 8 pounds of honey, a medium frame about 6 pounds and a shallow slightly less.

Sometimes, the colony will not fill out all the frames in a box. You only get a partial harvest. Trying to estimate the amount of harvest you will get is useful for planning – but really only a wild guess.

Instead of trying to decide on a number of hives based on expected harvest, it is a better plan to consider how many hives you can manage – either on your own or with help. Well managed healthy colonies always produce more than weak sick ones.

Why do I often have two hives sitting side by side with one making 3 supers and the other only 1? Assuming both are healthy, of equal population and same management – the genetics of the queen and drones must be considered. Though not the biggest factor in my opinion, it does seem at times that some colonies just do better than others. 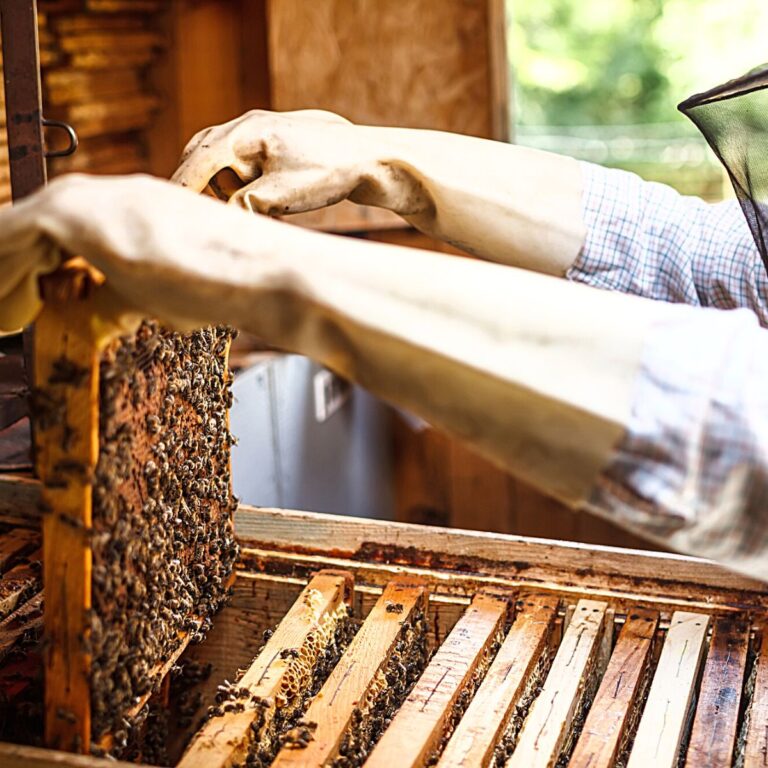 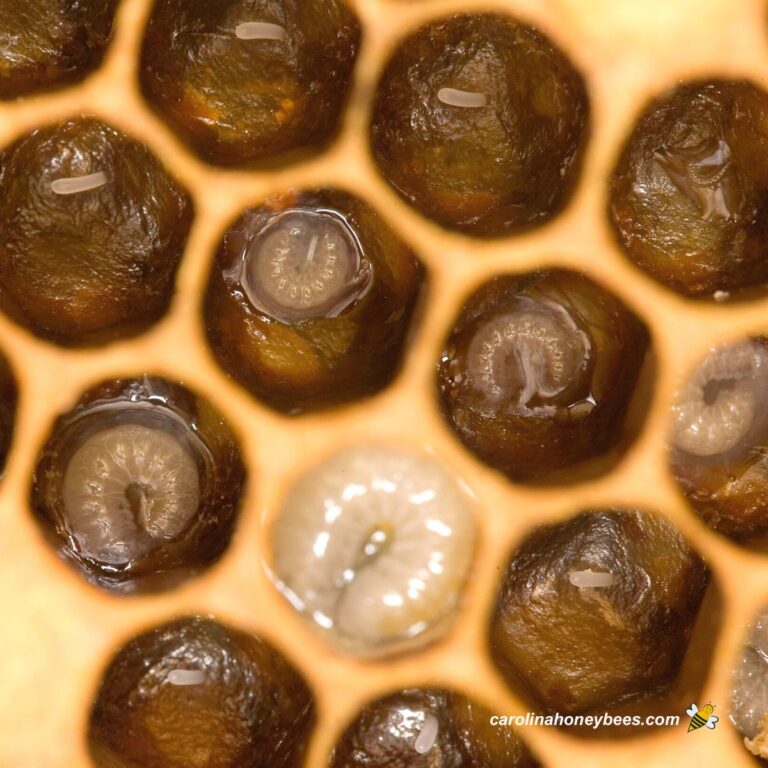 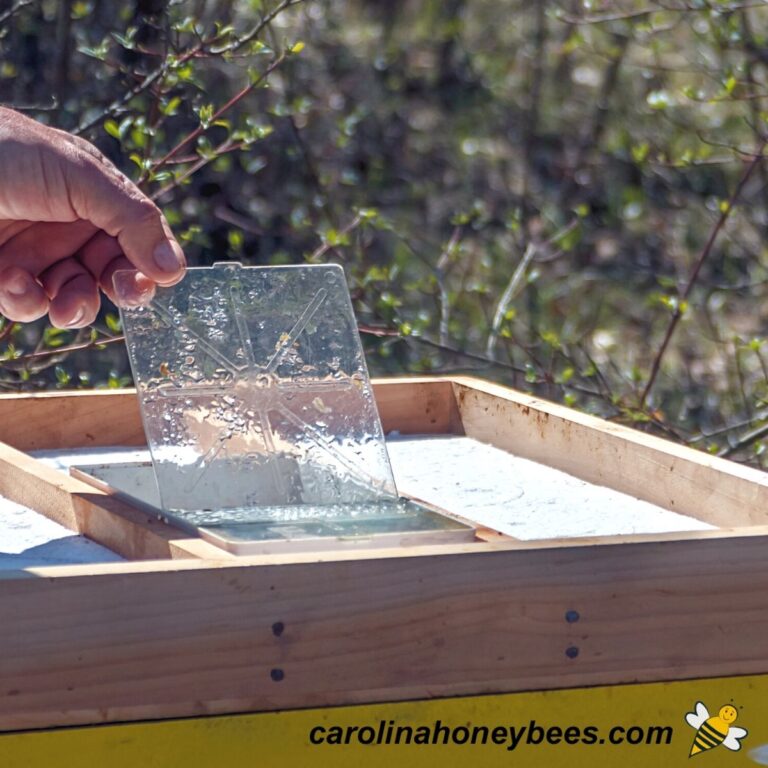 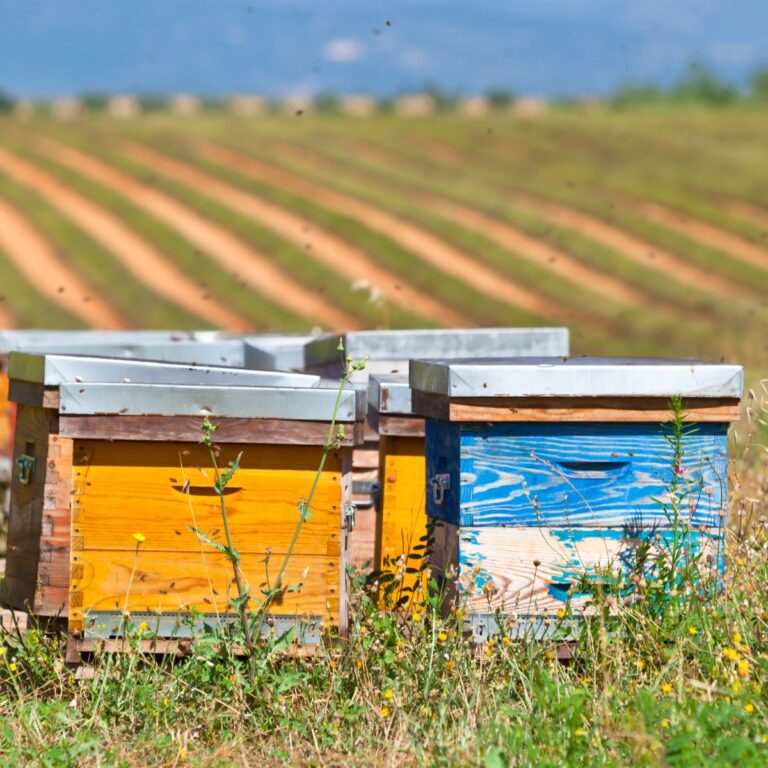 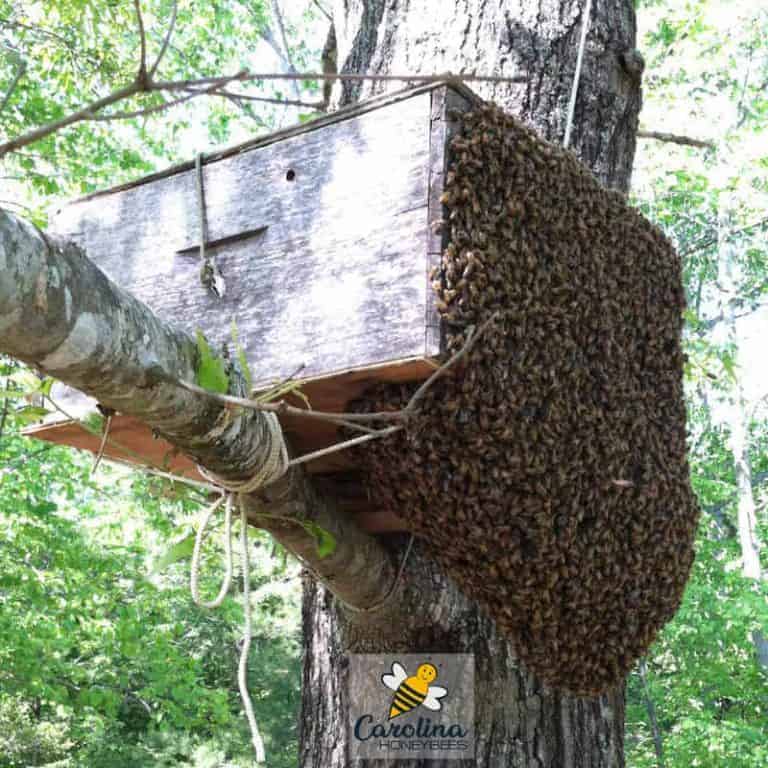