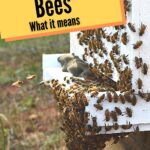 A fuzzy mass of bees are hanging from the front entrance of your hive, what can this be?  You are probably witnessing bee bearding.  This activity is most common during the hot, humid Summer months.  It can be rather alarming to new beekeepers.  But it is not cause for alarm, as with most things related to honey bees, they are trying to tell you something

Why are My Bees Hanging On The Hive Entrance?

As hundreds of bees hang onto the landing board and each other, you may wonder if there are any left inside.  Why would the bees want to hang outside?

They do this for the same reason that we like to sit on the front porch and enjoy a cool breeze. It gets hot inside a crowded bee colony.  Thousands of individuals add more body heat and restrict the flow of cooling air.

Workers must keep the brood nest in a temperature range that will protect the developing bees. If internal temperatures become too great, brood will die.

As the colony population grows, the inside of the hive heats up-especially on hot or humid days. When some of the older workers move outside, managing internal temperatures becomes easier.

Bees in the beard are calm and still as they congregate near the hive entrance.  Some of them may be fanning their wings to push cooler air into the hive.

It is not unusual to see a long mass hanging in a group from the hive entrance. They look so intriguing that you may want to touch them – don’t! Those stingers still work just fine.

Washingboarding bee behavior happens more in times when incoming food is sparse. We really do not know for sure why they do this. But, as late afternoon arrives and foragers can not find a lot of food in the field – they stay close to home.

Why are My Bees Bearding at Night?

Hot Summer evenings are the most common time to see bearding behavior in bees.  This is a common question asked by the students in my online beekeeping class. They want to know how to get their bees to go inside.

As the foraging day grows to a close, workers are returning to the colony from the field. They are finished collecting resources for the colony for the day. It is hot and humid inside the hive.

Rather than restricting air flow through the hive by remaining inside, these foragers gather in clumps on the hive front.  This is a rather amazing sight to witness as some of the bees hang in beard shaped forms.

Other times the waiting workers spread out in weird patterns. It is interesting to see how the different hives in the apiary react in slightly different ways.

When the night cools off, the honey bees will usually return to the inside. In times of extreme heat, humidity and crowding, some bearding may still be obvious the next morning.

Why do Bees Beard in the Rain?

It is not uncommon to see a strong colony bearding on a rainy day – even if the temperatures are not high.  Again, this is an attempt to control heat and humidity inside the hive.

Also, because not all bees fly in bad weather all of the workers are at home with nothing to do.  This is especially true during heavy rain, most honey bees stay home. Rather than be in the way inside – they may choose to move outside.

When a beekeeper first experiences bearding, it is common to think the hive is about to swarm.  This is not so.  Honey bees in a beard do eventually go back in the hive as the temperatures cool.

While a swarm of bees will simply leave the hive.  A swarming hive does not hang on the front of the hive in motionless clumps.  Instead they leave the hive and hang nearby until ready to leave for their new home.

However, you must remember that a colony with a large population may experience more crowding and have a larger beard. A large colony is always more prone to swarming.

What You Should do If Your Hives Beard?

When you notice bee bearding in one of your colonies, do not try to interfere with the bees. They will most likely go back in the hive as the temperatures cool.

Trying to make the bees go inside with smoker or other methods is just a useless waste of time and stressful for the bees.

If you have only one hive that is bearding every day and other hives are not, you might want to perform an inspection of the hive.

Check the hive to ensure that the bees do have enough space inside and are not crowded on the frames. If every single frame is covered with bees, they may not have enough room. Consider if it is time to add another box on the hive.

If your bees are not over-crowded and you see no sign of queen cells, the bees are most likely just trying to control hive temperature.

Perhaps you can give the hive some extra ventilation by using a screened bottom board or propping the telescoping top up on a couple of popsicle sticks to aid airflow.

If you find evidence of swarm preparations, you must decide how to proceed. You may decide to split your beehive into 2 parts before the bees do it themselves.

Enjoy watching this natural behavior of honey bees.  Some colonies will do it more than others but any colony may beard on a sultry Summer evening. It is not always a sign of congestion. Bearding is usually a sign of a healthy honey bee colony.  That is always a good thing. 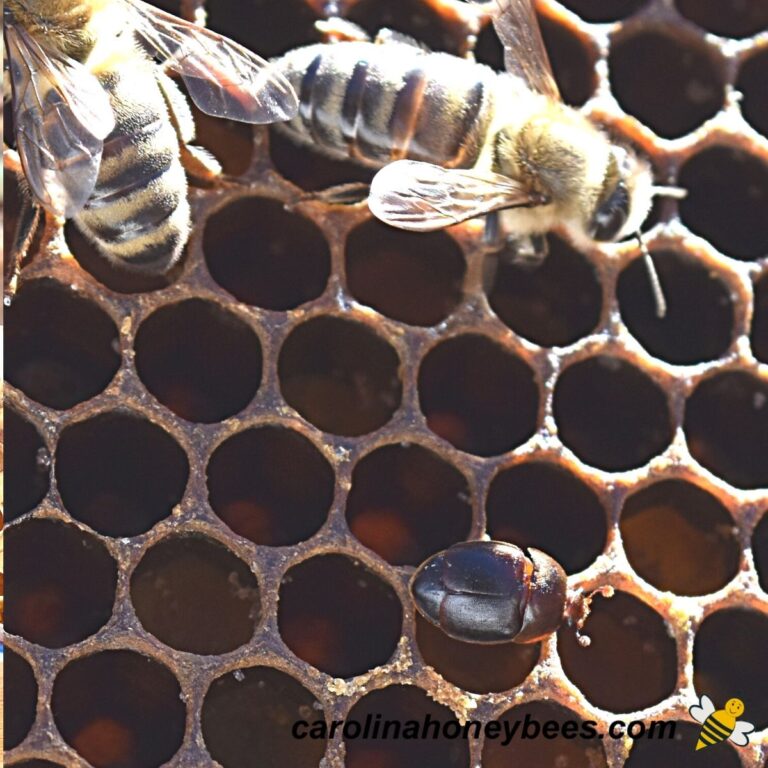 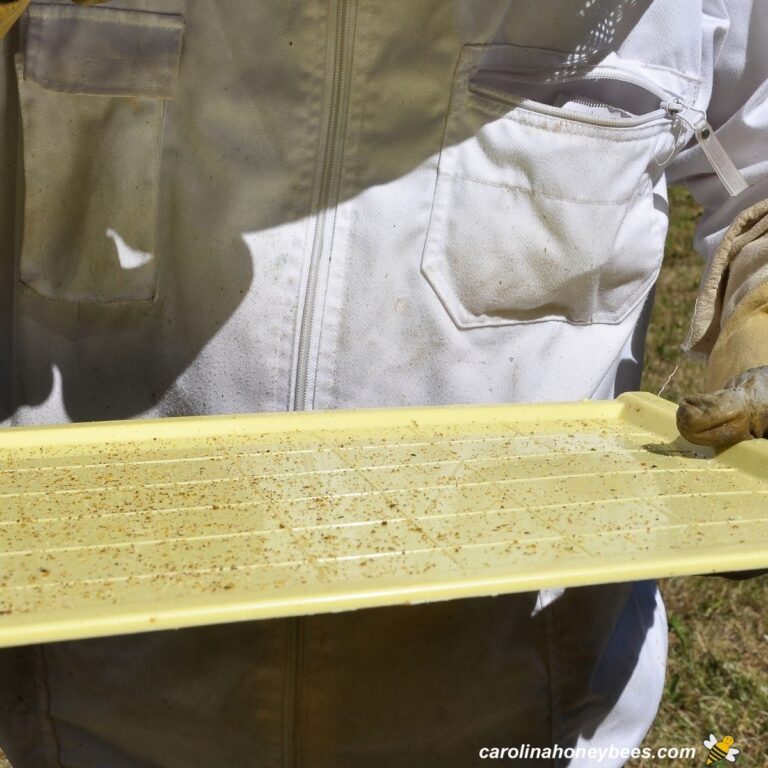 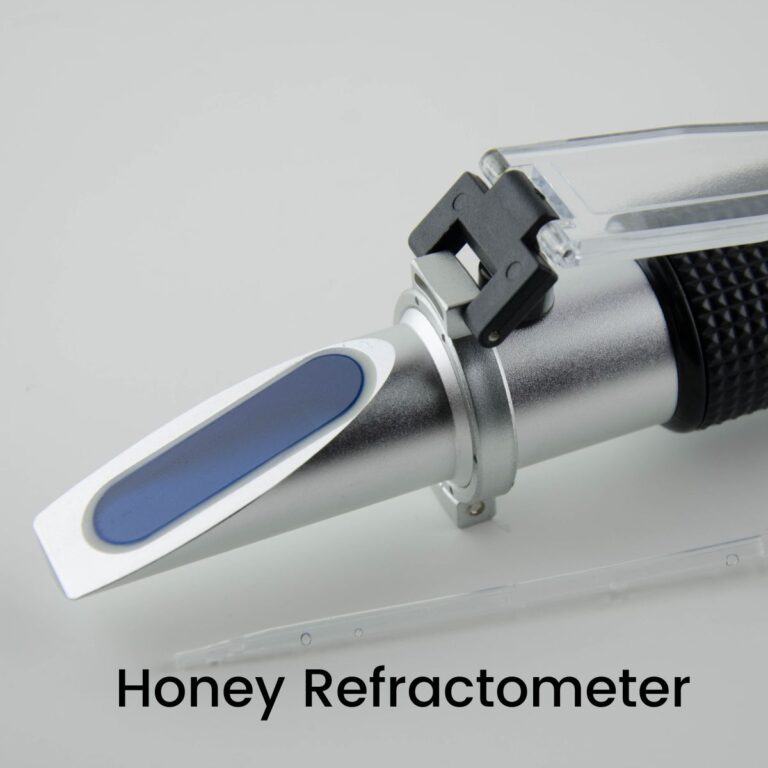 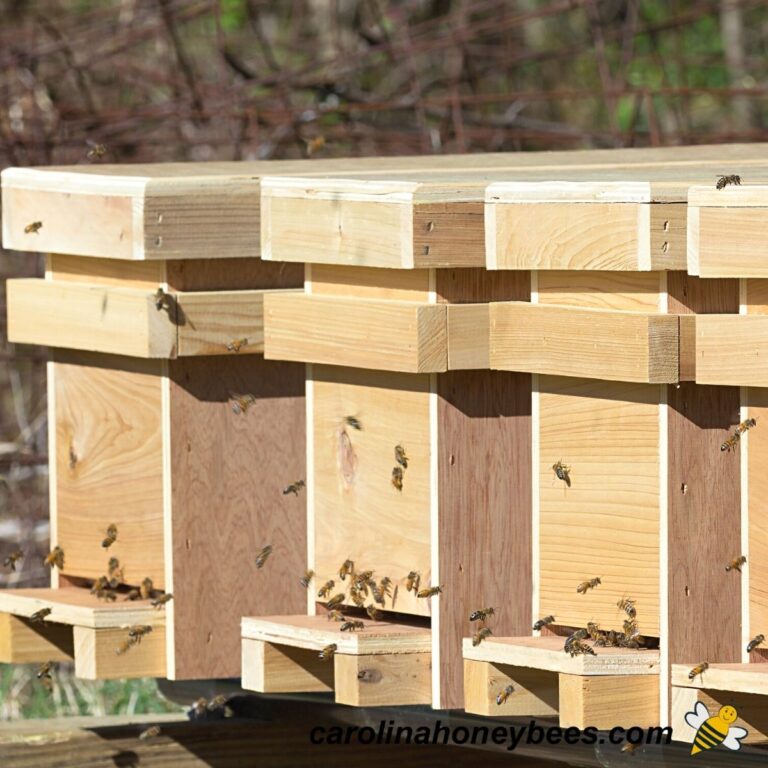 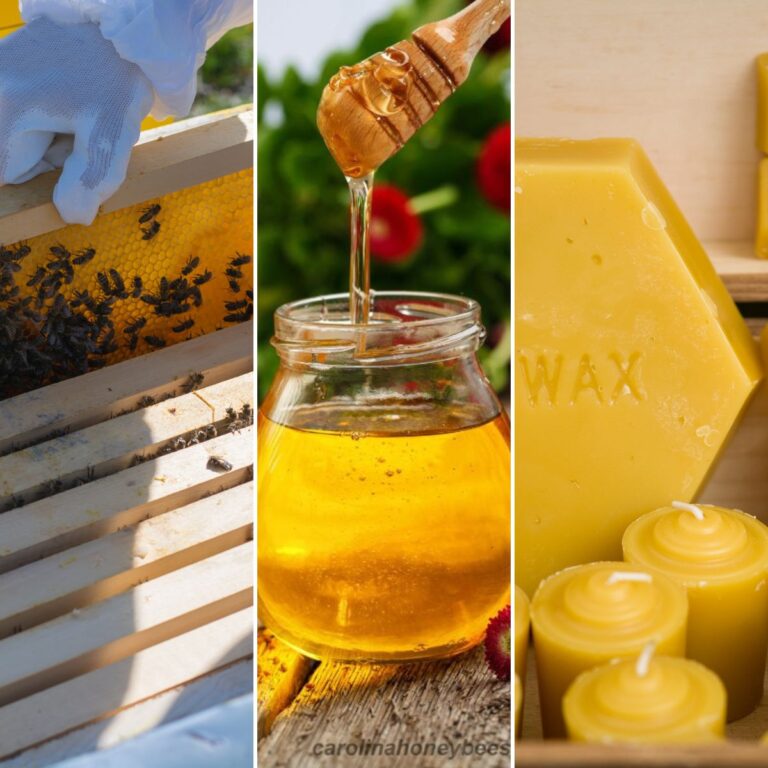 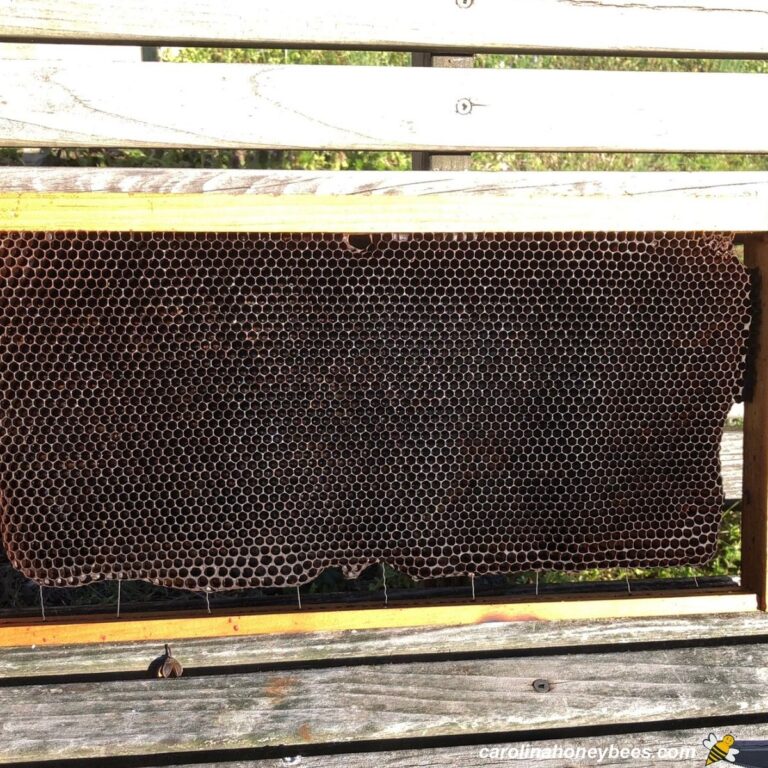