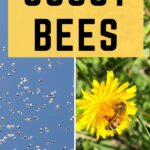 Each member of a honey bee colony has a job to do. Every bee task is important but none more than those selected to be scout bees. These worker honey bees are responsible for finding new home locations for future swarms and searching out food sources. Scouting bees only represent a small percentage of colony members but they save the colony many wasted miles of flight.

Foragers are the female workers responsible for collecting things the hive needs. They are the older members of the colony. Working outside is their final job for the family.

Thousands of workers are needed to bring in the resources necessary for daily hive life. They also must store honey and pollen for Winter.

This coordinated effort would not work if each bee had to find food alone. To aid in the goal of having a productive system of nectar collection, a percentage of colony members are responsible for looking for new food sources. These are the bee scouts.

Are Scout Bees Male or Female?

Scout bees are female. They are physically the same as any other worker bees in the colony.

These bees “scout around” for rich nectar or pollen sources. When an abundant food source is found, the scouting bees return to the hive.

Inside the hive, a scout bee dances to direct other foragers to the food source. In time, more and more of the foragers will visit the food and return to dance and tell others.

This “bee telegraph” system continues throughout the warm season. With scouting behavior continuing to seek out more and more resources.

The way dance movements are used to share information is a unique fact about honey bee colonies.

Scout bees dancing movements are performed inside the colony on the surface of the comb. They show foragers the general direction and distance to food.

This efficient system of locating food promotes colony productivity and helps bees produce a lot of honey. But, locating food is not the only role of honey bee scouts.

How do you know if you are seeing a scout in the field? You probably will not be able to determine their status. Scout bees look the same as any other worker bee. It is their behavior that is different.

You might see a bee flying around a tree trunk investigating any knot holes or openings.  She seems to be searching for something – not like normal foraging behavior.

When you see a honey bee investigating your swarm trap, or the siding of your home (Oh No) – it’s time to pay close attention.

Honey bee colonies have a remarkable method of making more bee families. This is reproduction at the colony level. It is called honey bee swarming.

In this somewhat risky proceedure, roughly half of the hive population leaves to form a new colony in a new location.

The rest of the bee family remains in the mother hive to carry on hive activities. This includes rebuilding the work force, producing a new queen bee, and raising baby bees to rebuild the population.

Scout bees play a critical role in swarming. The new colony needs to have an appropriate nest site to build their new home.

Bee scouts not only look for food – they also look for possible nest sites. These bees travel long distances from the hive when needed.

Swarming is risky business and not something a colony does on a whim. It may seem that a colony warms on a moments notice but this is not true.

The bees make careful preparations in the weeks before casting a swarm.

Any hollow of an appropriate size is a candidate for the new colony.  And bees choose spaces of all sizes! Though a volume of 40-50 litres (size of one deep brood box) is a common choice.

Most beekeepers like to use that size of bee box for bait hives when they hope to attract a swarm of bees.  They also add swarm lure to entice visiting bees to take a closer look.

Scout bees are attracted to the smell of old honeycomb. This results in a good nest site being used over and over again as the years go by.

If a colony dies, wax moths and other pests will devour the old comb and honey. This is actually a good thing as it helps removed diseased comb.

While bee scouts may be on the lookout for possible nesting sites at any time, the search for a new home becomes more serious right before the swarm emerges.

It is not uncommon to see scouting behavior performed by many bees at a bait hive before a swarm arrives.

How Many Scout Bees are in a Swarm?

A typical swarm of about 10,000 honey bees will usually contain 400-500 scout bees. The swarm leaves the parent hive and hangs in a cluster nearby.

During this transition time, scout bees work to finalize a home choice. Each bee dances and promotes the site she thinks is best. The majority of dancing bees must agree before the swarm takes flight.

Sometimes bees “get stuck”, if a decision can not be made, the swarm remains in the transition spot longer.

Scout bees communicate through dances even on the surface of the ball of hanging bees. (It is fascinating to watch if you ever have the opportunity to observe a swarm up close.)

Small groups of bees are recruited to visit the best new locations. If they like the new site, they will return to the swarm cluster and dance in favor of choosing it.

Over time, more and more scout bees dances will match.  The swarm comes to an agreement on where to go.

This scouting behavior of the honey bee swarm can continue for hours. Bees fly back and forth between the hanging cluster and the top site choices.

How Scout Bees Get the Swarm Moving

Researchers do not understand exactly how the bees reach an agreement. But eventually, most of the scouts will be dancing for the same site. It is time to lead the mass of bees to the new home.

The dancing scout bees stop dancing. They work their way to the inside of the mass of bees. Using their flight muscles, they produce a high-pitched beep at their sisters.

All this activity causes the temperature of the cluster to raise. Suddenly, the whole swarm will break apart into the air.

Scout bees and their recruits will fly slowly around and through the flying mass of bees.

This directs flight towards the chosen new home site. The whole swarm flies off at the speed of about 7-8 mph.

Swarm Is Directed Inside New Home by Scout Bees

Upon arriving at the new home location, scout bees will surround the opening and “scent” using their nasonov glands.

This encourages their sisters to move inside. A large honey bee swarm can enter the new location in a brief amount of time.

Occasionally, the swarm will reject the site chosen by the scout bees. When this happens, the swarm leaves the location and goes to another secondary site.

A honey bee colony is a large social organism. Individual members work together for the good of the colony as a whole.

Using scout bees to search out needed resources is a valuable way to avoid wasting time and energy. Colonies must grow and prepare for Winter. Let’s hope our scout bees make a good decision and chose a good location  for the colony.