How to Set Up a Swarm Trap for Honey Bees

When to Set Up Your Swarm Trap

Beekeepers who learn how to set up a swarm trap in a good location may be rewarded with free bees. Swarm traps, also called, bait hives are structures that beekeepers use to catch honey bee swarms. Swarming is a seasonal event that occurs most often in Spring. However, we want to get those swarm traps set up well before Spring arrives and scout bees are looking for new sites.

Most beekeepers try their hand with a swarm trap at some time in their beekeeping experience.  Maybe they will catch a swarm that issues from one of their own hives.  This prevents the bees from getting away.

Sometimes we get really lucky and catch a swarm of wild bees! Didn’t know you could catch wild bees? Yes you can and it’s a hoot. Because, who doesn’t love free bees, right ?

For some new beekeepers, catching bees in a swarm trap might be the only way they can get started in beekeeping. Buying honey bee colonies and equipment can get rather expensive.

What is a Honey Bee Trap

The terms : swarm trap, bee trap, swarm trap and bait hive all mean the same thing. These words are used to describe any man-made structure that is intended to catch a honey bee swarm.

Swarm traps are made of many different materials or you can purchase commercial examples from beekeeping suppliers.

How Many Swarm Traps Should You Have?

How many swarm traps should you have on your property? Well, that depends on your space, time and budget.

Only have as many traps as you can check weekly. Most swarm traps are only designed to hold the swarm for a brief time. They will outgrow it quickly.

It is good to have several swarm traps spaced out in different locations and maybe even made of different materials. We never know for sure which one the bees will like best.

Yes, they do. Swarm traps can be very successful at catching swarms. And sometimes, you can catch more than 1 swarm in the same trap during the warm season.

However, no trap will catch every swarm of bees. I still have swarms that decide to go out on their own instead of using the free apartment I have fixed for them.

If the scout bees find a location better than what you are offering – the swarm will go there instead. You never can tell with bees. I have had swarms sit down on the outside of other beehives.

How to Make Your Own Bee Swarm Trap

A common type of bee swarm trap is made using an old hive body. This would be a box that has contained bees in the past. Preferably, a scuffed old box with traces of comb, propolis and wonderful bee colony smells.

If you have been keeping bees for a few years, you probably have one of these laying around. If not, ask around and you should be able to find an experienced beekeeper who would give you an old hive body or sell it really cheap.

Honey bee swarms don’t always choose to go into provided boxes. Often, a beekeeper will find a swarm of bees hanging on a low limb of a tree. These are easily gathered.

But, the swarm can also be hanging in the highest branches of the tallest tree around. This is why I always have a bee swarm trap near my bee yard.

Setting up a swarm trap or bait hive is a good project for early Spring.  A good swarm of bees caught early in the year, may build to be a strong colony before Winter arrives.

Finding the Best Location for Your Honey Bee Swarm Trap

Much research has been completed on the ideal placement of bee swarm traps. If you are looking for data, you will find a wealth of ideas to help you choose a perfect spot.

What should your swarm trap be made of?  How large should the inside dimensions be?  Different sizes are suggested as being the best to entice a bee swarm.

How high up in the air the bait hive should be.  And, how far away from your current hives is best?

While you can find some wonderful guidelines to follow, the bees will sometimes do what you don’t expect.

And yes, sometimes the bees will not even give you bait hive a second look. During those times, you may be collecting the swarm from a tree.

Do not hesitate to set up a swarm trap because you don’t have the perfect location or perfect materials. You just never know what can happen.

Most resources advise setting up a swarm trap higher (13 feet or more) off the ground. However, that is too high for me to get down by myself! Do what works for you!

Choose a shady location at that is what bees seem to prefer. Also, you want the opening to the trap to be small – no more and 1-1 1/2″ in diameter. Give your trap a solid bottom so the bees feel safe.

A couple of hive traps placed around your area will increase your opportunity to catch a swarm of honey bees.  I like to put them in different directions from my hives.

It is rare to get out to this box without being accompanied by some of the farm animals- goats, donkeys or barn cats.  Who would have guessed that they knew so much about setting up a swarm trap ?! They certainly do not like the boxes that are full of bees!

A swarm trap (or bait hive) can get very heavy in a hurry. When you are choosing a place for your swarm trap, think about how you are going to get it down with bees and some honey inside.

I have this box connected to a rope that allows me to raise and lower it with ease. The use of a pulley system is a great idea. Don’t under-estimate how quickly a trap can become too heavy to lift .

Luring In the Scout Bees

Before a swarm can move into your trap, they have to find it. Luckily bees have an extraordinary sense of smell.

If you have it , throw a piece of old comb in the bait hive. Yes, wax moth larvae may destroy the comb but that’s okay – it does not represent a significant loss.

It is okay to use the oldest, darkest brood comb that I have.  In fact, older honeycomb is a good choice. And, the old comb will not represent a real loss to me if  destroyed.

Don’t have any old comb? Even an empty frame that smells of beeswax and propolis can help.

And of course, you can purchase commercial swarm lure. I find that their quality varies greatly.

Why a Swarm Trap is Unsuccessful

There are several possible reasons for this trap’s lack of success.  Perhaps there were fewer swarms in the area last year.

Or, maybe the bees found  better accommodations elsewhere – in hollow trees, other traps or the boxing of people’s homes?

Or just maybe, there was something about this honey bee swarm trap that the early visiting scout bees just didn’t like.  It looked fine but did it smell funny

We have just finished and a scout bee is already checking it out ! She must be attracted by the scent – perhaps a bee swarm will move in soon!

A Final Word on How to Set Up A Swarm Trap

At around $100 per bee family, learning to set up a swarm trap is not effort wasted. If you catch only 1 swarm your investment was worthwhile.

Try several different types of swarm traps and put them in different locations – who knows what may happen?

Now where to you have room to add a few swarm traps near your apiary?

Collecting a Bee Swarm From My Bait Hive
Next Post: Honey Bee Swarming – Why Bees Swarm 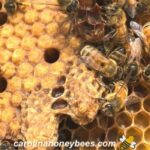 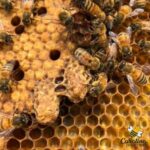