Finding a bee swarm can be an exciting time for beekeepers. However, it is not always a welcomed sight. This is especially true with a Fall swarm of bees. But, is not as uncommon as you might think. Though not the prime season for swarming, it can still happen. Late season swarms have a reduced chance of surviving through Winter. So, what’s a beekeeper to do when we see a small swarm in a tree with leaves that are changing color?

Swarms are exciting and can mean the opportunity to set up a new hive. However, they can also be a major pain.

In most cases, the late Summer or Fall swarm is not a bonus that is likely to result in a healthy beehive. At least you should not expect much for that season and they may not survive Winter.

We often wonder if the effort to collect it is time well spent. But, most of us do it anyway – because we are beekeepers. That’s what we do.

There are several reasons that a late season bee swarm may not be a great opportunity. The major issues are related to the fast approaching months of cold weather.

Can the Bees Get Ready for Winter?

Winter is coming soon. As the days grow shorter and cooler, foragers will not be able to collect as much food.

Colony population begins to drop as the queen slows egg laying. But inside the hive, there is a lot of work to be done for the new colony – and fewer hands to get it done.

Winter food must be stored and in most cases (for a new swarm colony) – the bees must draw comb. Can the swarm build up enough to survive? In many cases, it will not.

Risk to the Mother Colony

If the Fall swarm came out of one of your own hives, that hive too is now at risk.  The mother hive must make a new queen from queen cells left behind. They must also rebuild their colony population to replace lost workers.

In most bee yard, beekeepers hope for strong Fall colonies that are well equipped for Winter. These hives are rearing new fat bees to survive the long Winter months. They also work feverishly to store honey and pollen.

Why do Colonies Swarm Late in the Season?

Well, do we really know why bees do anything?  Sure we see patterns and understand why bees react to certain stimuli.

Hundreds of years of study have taught us much about some aspects of bee life. But, we still have so much to learn about honey bee behavior.

Bee researchers are not certain why colonies throw Fall swarms. These swarms are different from the reproductive swarms that happen early in the season – and often much smaller.

We do know that small late season swarms have an almost 0% chance of survival without beekeeper intervention.   Still, there is some merit in catching these small ones if possible.

Even if the beekeeper does not intend to overwinter the small swarm, there is still some value in catching it.

If a queen is present, the small colony can be placed in a nuc box for a while. The queen and even the bees with her may be needed in another colony-that is queenless and weak.

In this way, you can attempt to save the bees in the swarm, even if they don’t become a separate, stand alone hive.

It is late September, a couple of years ago. I see a small swarm in a tree.  I do not know if it has recently issued from a hive or has been up there for a week or so .  It is the size of a small cantaloupe at best !

As the Beekeeper, I am faced with a decision.   This swarm has almost no chance of building into a viable winter colony. If I do nothing, the swarm will most likely die.

The beekeeper who tries to save these small swarms must be prepared to feed the bees heavily And, it may still be necessary to combine smaller colonies together before cold arrives.

Using my Bucket to Catch the Swarm

The first thing- get the bees out of the tree.  Remember the mated queen may be worth the effort.  Even if she is not the greatest queen in the world, as long as she is mated, I could put her in a queen less hive.

Using my “bucket on a pole”  I reach up about  12 feet and bump the limb to knock many of the bees into the bucket. These bees are quickly dumped into a box containing 5 frames of drawn comb.

This is called a NUC box and is half the size of a regular 10 frame Langstroth hive.  It is a good idea to match the size of the box to the bee population.  A large box would be too much room for this small swarm to defend.

Do I have the queen ?  YES I DO.  A few minutes later, the queen is inside and some of the bees that I dumped in have come outside to inspect.

Then, they begin to “scent” at the front signaling their sisters to come down. I am seeing more bees at the front door ! They are scenting to call down the rest of the bees still on the limb!

A temporary feeder jar with some sugar water is placed on top.  Once most of the swarm is inside, the entrance is reduced to a tiny opening – approx 1 inch in width.

Hopefully the bees will realize this is the best chance available for them and stay in the box provided.  Once dark falls, I move the box to the bee yard.

Ok, I can say I tried to save them. As I tell students in my online beekeeping class – you can’t save them all!

Honey bee colonies that swarm during Spring buildup are called reproductive swarms. They have a better chance for survival.  But when bees swarm in late Summer and into Fall, their survival is unlikely.

We don’t know for sure why bee colonies do this risky behavior. Perhaps the colony is reducing the number of bees in their hive or just wanting to make a new queen? Either way, it is surely a part of the big bee plan that we beekeepers can only marvel about. 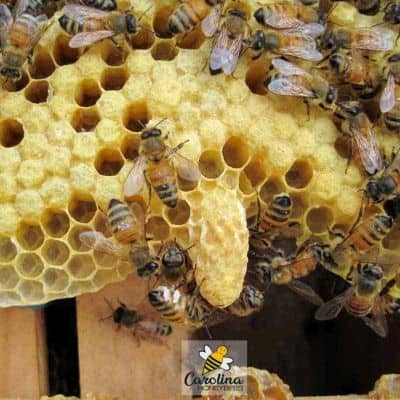 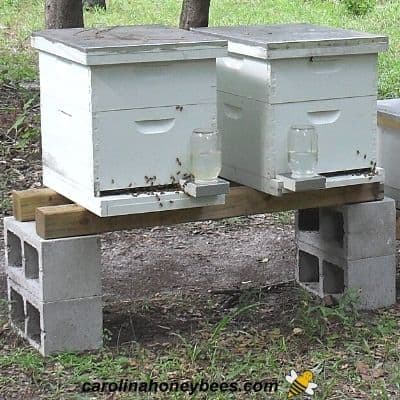 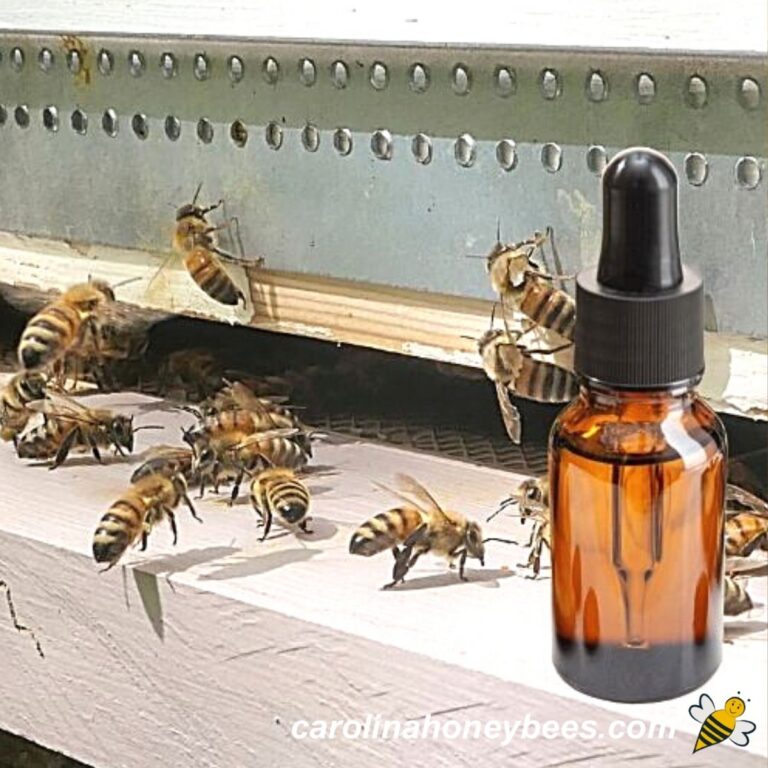 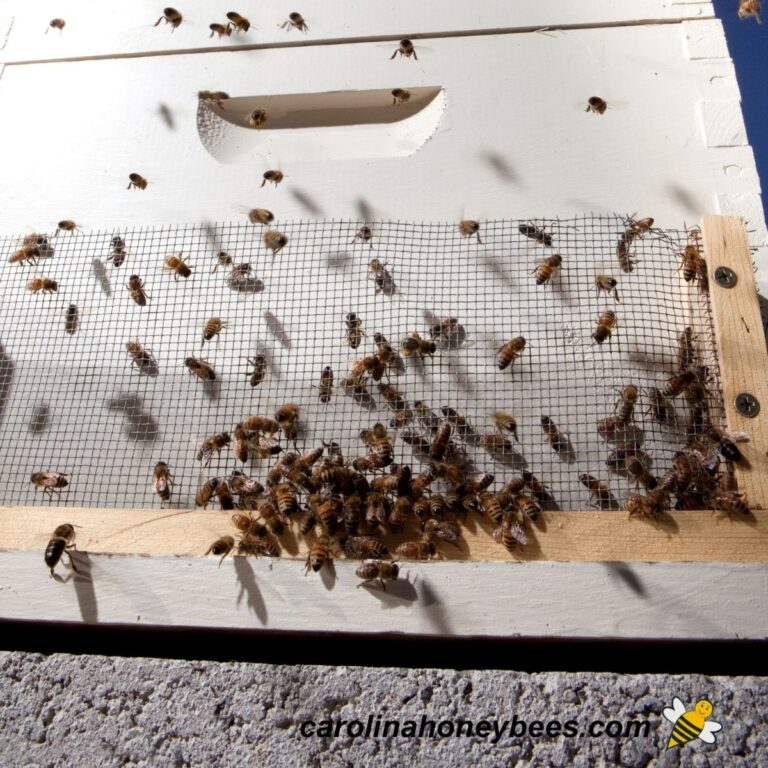