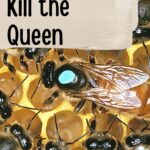 In a colony with thousands of female bees, one has a special place.  She is the heart of the hive – the one member essential to continuation of the colony.  We are talking about the queen honey bee.  Still, in spite of her importance, a colony will sometimes choose to destroy her.  Why do honey bees kill their queen?

Why Bees Reject a Queen

A colony of honey bees will reject the queen if they are unsatisfied.  Figuratively speaking, she is voted out.  How the workers come to this agreement is still a bit of a mystery that puzzles bee researchers. But, we do know some of the things that seem to trigger this action.

The Primary Purpose of a Queen Honey Bee

The function of the queen is a special task that no one else can do. She is the only member of the colony that can mate and lay fertilized eggs using stored sperm.  Fertilized eggs develop into female workers who are necessary to maintain the hive.

Unfertilized eggs become drones or males. Male bees are important to the genetic future of bees. But, they do no work to support the colony.

The number of eggs laid per day depends on many factors.  These include the genetics of the queen, time of year and availability of food resources.

But, we do know that the workers have a system for evaluating her performance. Once they are dissatisfied, she must go.  In normal circumstances, there can only be one queen in the hive at a time.

However, during the time of year when a swarm might happen, the bees begin queen replacement activities before the swarm leaves. Normally, the old queen leaves with the swarm before her replacement emerges. Therefore, the bees do not have to kill the old one.

There are several circumstances that could result in a queen being dethroned:

Bee brood refers to young developing bees. Brood gives off pheromones. Workers know if there is an imbalance inside the hive. A lack of brood pheromones at a time when egg laying should be high could be an indication of a failing queen.

The queen bee is the largest bee in the hive and she has pheromones too. As her attendants groom her and interact with other members of the colony, these pheromones are distributed throughout. As she ages, her pheromones naturally begin to wane. With decreasing egg laying and low pheromone levels – supersedure of the queen is likely.

Workers may decide it is time for a new egg layer: if the colony is experiencing brood problems, such as sterile or infertile males or brood disease is present.

Sometimes, we beekeepers contribute to queen rejection. If the hive is experiencing stress, the queen is often. Even those that have nothing to do with her performance.

Going into the hive too often to see what is happening in there can cause the colony to react. Stressed bees are not happy. They will try to find a way to make things better.

Likewise, if the she becomes damaged and looks strange, the bees may kill her. This can happen during hive inspections, when trying to mark your queen or if visiting robber bees attack her.

Of course, any new strange queen added to the hive is likely to be destroyed. This could be a virgin returning from a mating flight that accidently goes back to the wrong hive. Or more likely, a replacement provided by the beekeeper.

The Queen is Killed

The first step in queen replacement is to kill the one currently in place. When the queen is slated for death, workers will surround her and begin to sting.

They will pile on top of one another and surround her inside a mass of bees.  This is often called “balling the queen”.  Just as they can deal with invader hornets in this method, the heat generated by the ball kills the queen bee.  Her body is then thrown from the hive.

If preparations have not already began, the colony now goes into full emergency mode.  Queen cells are hurriedly constructed and the race against time begins.  With no queen present to lay fertilized eggs, the bees must use the materials they have on hand.

How a New Queen is Chosen

The honey bee colony has a miraculous plan for making a new queen bee. The process begins very early in the bee life cycle. Fertilize eggs are necessary and the young larva receive special care and feeding.

For years it was thought that the feeding of royal jelly made a queen – we now know it is more complicated than that. However, queen larva do receive a special diet blend.

This process takes time. it is not simply a process of “appointing” one of the other females as queen. This does not work. A queen must be raised from the tiny young larvae stage.

Colony Without a Queen is in Peril

Queen replacement is a dangerous time for the bee colony.  Worker bees have a short life span during the the warm months. This means the hive must see a constant flow of new bee babies.  These young will take over tasks of other colony members when the time comes.

A hive without a queen will fail.  Older workers begin to die off over the next month or so. With no new adults emerging, colony population plummets.

The weak hive may fall prey to robber bees from other hives.  Pests such as wax moths and Small Hive Beetles also take down small colonies.

The job of a beekeeper is to manage beehives in a productive and healthy manner. Yet, mistakes happen. It is not rare for a beekeeper to mistakenly kill the queen. Now what?

While this is certainly a sad situation, it is not necessarily a death sentence for the colony. If the hive has a good population of workers and plenty of fresh fertilized eggs – they can make a new one.

However, if the beekeeper buys a mated queen, this hurries the process along and introduces new genetics. This saves weeks of time waiting for the hive to raise a new queen, her to go out for mating and come back to start laying eggs.

You might think the hive would be over-joyed to have a new young egg layer. Alas, this is not usually the case. A big part of life inside the hive is governed by scent.

Right away, your bees are going to think – ” hey, this doesn’t smell like our leader”. The queen’s scent is different and usually results in her death immediately.

Thankfully, beekeepers can use special cages to introduce new queens to an existing colony. the small cage has a candy plug in one end. It takes the bees several days to eat through the plug and release the bees inside. This allows them to become familiar with the pheromones of the new queen. Over a period of 3-7 days, they come to accept her.

Despite the risks involved, honey bee colonies kills their queen to give the hive its best chance of survival. A young, well-mated queen is more likely to provide the future worker force needed. These bees in turn defend the hive and collect needed food for Winter.

Our honey bee colonies function as super-organisms where life occurs on the individual level and on the colony level. Many amazing processes take place inside the hive that keep things going along as they have for millions of years.