Finding the mess left behind by a large wax moth infestation can be very upsetting to a beekeeper. Why did this happen? Could this problem have been avoided? Maybe. Wax moths are often blamed for the death of a honey bee colony. However, this beehive pest is often a symptom of a larger problem rather than a hive killer on its own.

Any hive may attract the attention of wax moths. The scent of beeswax, honey, pollen and other hive odors lure the moths inside.

However, not every hive will suffer a major attack. A colony with a strong population is well equipped to throw those pesky moths out!

But the smaller, weaker honey bee colonies are at the greatest risk of severe moth damage. For a colony with a very small population, the moth damage may be the last straw.

The population strength of any beehive varies throughout the season. Colony population normally swells to highest numbers during late Spring – Summer.

But not every hive maintains a large population all season. A new hive started from buying bees in a package will need several months to build a population.

Beekeepers often split large colonies into 2 or more parts. When you split a bee hive, failure to include enough bees in each part could lead to problems with moth damage.

Any time you mix warm weather conditions with weak hives, there is a potential for problems caused by a wax moth infestation.

What Is A Wax Moth?

Let’s get to know this beehive pest, there are actually to types that can cause a problem for our bees.

Both types of moths are attracted to the hive by odors. They are most active after dark and often enter the beehive at night. Adult moths do no real damage but they leave behind wax moth eggs.

It is near impossible to keep moths out of a hive. In my opinion, it is an exercise in futility to try. However, some beekeepers do set up various types of moth traps near the bee yard – maybe they help?

It is a common occurrence for a beekeeping student from my online beekeeping class to tell me “My hive was killed by wax moths”. This is upsetting for any beekeeper and especially for those new to the hobby.

However, wax moths don’t normally cause bee colonies to fail. Finding a wax moth infestation in your hive is just a symptom of another issue the colony has.

Unless this was a new colony just starting out, why was your colony so weak in population that moths were able to take over?

Life Cycle of the Wax Moth

Adult wax moths enter the hive and lay eggs on unguarded sections of comb. A strong bee colony with plenty of worker bees will patrol the comb.

Chasing adult wax moths from the hive and possibly removing moth eggs. However, the adult bees generally do not remove moth larvae.

So any eggs that are laid, may have an opportunity to “hatch” before the comb is cleaned by the bees.

Moth eggs can hatch in 3 days during warm conditions. These wax moth larvae (called wax worms by some beekeepers) are the true pests.

The larval moth stage can be completed in 19 days from hatch in warm weather. When larvae feeding stage ends, larvae spin white cocoons for the transformation into adults.

They will often eat away wooden surfaces in the hive creating a wavy surface and causing damage to the wooden parts of the beehive.

Wax Moth larvae are very small white grubs. To the untrained eye, they don’t look much different than bee larvae. In fact, it is not uncommon for a new beekeeper to say – “hey, my baby bees are crawling out of the cells!”

Or if the colony is very weak – adult moths stick around taking advantage of the free nesting area.

These voracious larvae eat and eat and grow. now, the adult moths may have left for another site.

What do Wax Moth Larvae Eat?

This is the type of honeycomb that provides the most nutritious food for their young. Moth eggs laid in this region will be nearest to their food source.

Wax Moth larvae eat beeswax, the remains of bee larval cocoons, bee cocoon silk and bee feces in the cell. All of these are present in older frames of comb.

This preference for used comb is why problems develop near the brood nest of the hive. But wax moth larvae can live on pure beeswax.

This is another reason to try to keep honey bee brood out of your honey supers. This can be accomplished by using a queen excluder.

How Do You Know If You Have a Wax Moth Infestation?

How do you know that you have a moth problem in your beehive? Believe me, it is easy to see.

Have you inspected a weaker hive only to find a webby, wormy mess? No this is not the work of a family of spiders, you have been visited by wax moths. Now, the wax worms are rapidly growing while they destroy your comb.

Evidence of Wax Moth Damage in the Hive

How does a beekeeper know if they have a problem with wax moths in the hive? The easiest method of detection is the presence of webbing and tunnels in the honeycomb.

Leaving behind noticeable tunnels with a “spider-like” webbing. Wax worms continue to eat until all the wax has been consumed. Leaving a webby, mess for the beekeeper to clean.

Larval feces (small cylindrical black pieces) can also be seen on the bottom board and in the webbing on the comb.

Wax moth larvae can be found crawling on the comb surface. The larvae are easily confused with Small Hive Beetle larvae, another bee pest.

Seeing an adult moth or a few moth larvae is no cause for panic. Even a strong colony may have the occasional moth or wax worm.

When a honey bee colony has a minor problem with moth infestations, the bees will clean and repair the comb.

You do not need to throw away good comb with minor damage. A strong colony will repair it for further use.

Cleaning Up a Hive Infested with Wax Moths

Even with advanced damage to the comb, the honey bee colony may be trying to save the hive. You may find a few bees trying to hang on or the colony may already be dead.

If your bees are all gone (or too few to survive), it is best to disassemble the hive. Scrap away any comb debris webbing etc. You will need to scrape any cocoons away from the frames and inside of the box.

Beekeepers who use plastic foundation have less of a clean up job on wax moth infected frames.  Those of us who prefer beeswax foundation need to keep extras on hand so we can replace the foundation.

If the colony still have enough bees and a queen, they may still be saved. Remove the frames that are most infested or damaged and reduce the hive size down to fewer boxes.

A 2 deep hive may need to temporarily be reduced to a 1 story deep. A single deep may need to be in a 5 frame nuc for a while until the colony population rebounds.

Any “good” frames that you remove from the hive should be frozen for 2 or 3 days to kill any moth eggs and then stored in a moth free place until needed.

Keep strong healthy colonies with lots of bees. Are there enough bees to cover most of the comb surface?

Don’t put too many boxes on the hive at one time if the population of the hive can not patrol the comb. This is very risky during Summer.

Moth Trap Use as a Control Method

Many beekeepers put out “moth traps” to try to lessen the number of adult moths entering beehives.

These traps are commonly home-made with many different “bait” recipes in use. Perhaps you can experiment with bait recipes. But don’t expect traps to be the complete answer to moth problems.

One of the biggest mistakes made by new beekeepers is improper storage of honey supers. Moths can destroy your drawn comb too.

Freezing comb and then place it in a tight storage container. Or use approved chemical repellants designed for this use.

A Final Word on Wax Moths in Beehives

While they may cause many headaches for beekeepers, wax moths are not an enemy of honey bees. They are a natural part of the bee ecosystem.

In the wild, wax moths enter an abandoned colony and clean up old comb. This leaves a clean disease-free cavity for the next bee swarm.

Use good honey bee management practices to deter wax moth infestations in your colonies. If you live in a region with cold winters, you will only have to worry about wax moths in the beehives during the warm season. 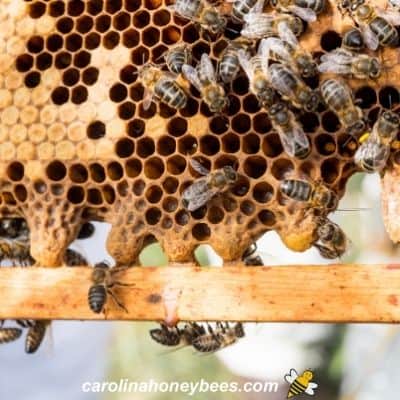 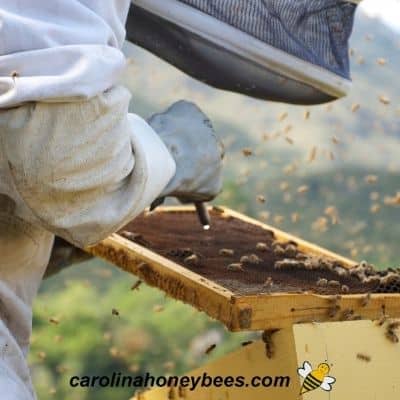 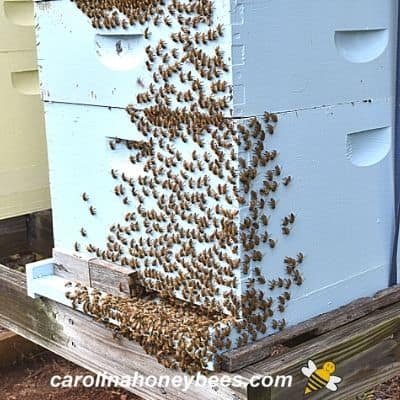 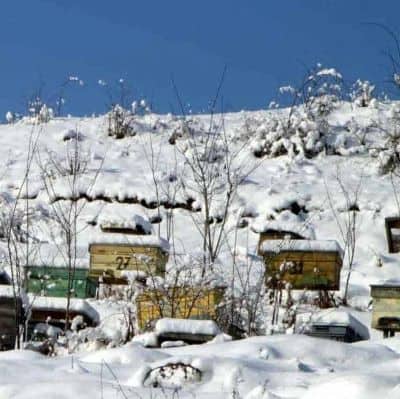