When visions of honeycomb dance through your mind, you likely think of bright golden sheets containing thousands of hexagon cells.  Honey bee produce these wax combs to use are the internal structure of their home.  New beeswax is actually white but it doesn’t stay that way for long.  In fact, if left in your colony for many seasons, you will have black honeycomb.

Black Honeycomb in Your Hive – What it Means

Finding very dark or even black honeycomb in a hive can be rather disconcerting to the newer beekeeper.  It takes a while for beeswax to darken that much.  However, if you purchase nucleus colonies you may receive older comb in the box.

In your own apiary, even the most beautiful beeswax sheets will darken as time goes by. Debris, dirt, propolis (bee glue) and stains from use are common.

Beeswax is a miraculous substance made by honey bees.  Worker bees have special wax glands on the underside of the body that are capable of producing wax.

These white scales of wax are shaped into the comb that we are familiar with. Virgin honeycomb is a thing of beauty but that does not mean you need to discard it when it gets a bit dark. However, there will come a time when it is a good idea to refresh your wax.

Dark brown honeycomb occurs most often in the brood nest of the hive. However, even comb used in honey supers can get darker. Debris, stains and other items are absorbed by the beeswax.

Fresh honeycomb is a thing of beauty but the bees don’t make it because it is pretty. (At least as far as we know!).  The hexagon shaped cells made by bees are used by the colony constantly.

Every hour of every day, thousands of little feet are padding across the surface of the comb.  Do you think they all wipe their feet when they come into the hive?  No, they do not.

Wax cells are used to hold food for the everyday needs of the colony.  There are also areas of stored food for Winter survival. Both honey and bee pollen results in some darkening of the honeycomb.

The area of the hive where young are raised is mostly likely to continue dark or even black honeycomb.  Nurse bees make thousands of trips each day to feed the growing larvae located in brood cells.

Bee brood require a lot of attention during this growth phase. All of this foot traffic results in some staining of the beeswax.  This means you will have some dark comb.

Another aspect of the honey bee life cycle contributes to comb color changes. During the last stage of development, the bee pupae is inside a capped cell. Sticky pupal cocoons are produced during the transformation. When the young bees emerge, these cocoon linings are left behind.

This means that over time, the beeswax comb becomes darker and the diameter of the cell is reduced.  Of course, with the passage of enough time – even combs that are not in the brood nest area may become black as well.

To promote good colony health, beekeepers should replace old black honeycomb.  Beeswax absorbs things inside the hive and substances brought into the hive.  Not only pigments from pollen, propolis and honey but toxic substances too.

Any chemicals brought into the hive by foraging bees may end up in the wax.  Pesticides and pathogens endanger the next generation of baby bees. Perhaps, these contaminants are in small amounts that are not enough to kill the colony – that does not mean that they don’t do any harm.

Even beekeepers sometimes contribute to the problem with old combs. Some treatments used for varroa mite control or other issues can build up in comb.

It is not the black honeycomb that you see that worries me.  It is the contaminants that may be in the wax – unseen that are the real problem. Rotating old frames out of the hive before they get too old is the best method.

In this process, a few frames are replaced each year.  This means that the colony is not having to start all over from scratch with all frames at once.

Beekeepers that specialize in producing beautiful white honeycomb use special techniques in managing their colonies. Honey supers are removed quickly once the honey is ripe.

They do not want the daily traffic of bees moving up through the boxes to stain the comb surface. These beekeepers do not reuse comb for several years either. They must install new foundation in their honey boxes each season.

Bees do like the scent of dark comb. It is a good attractant to a swarm trap. I have found that given a choice, a queen bee often chooses new comb over old dark comb.

Can you eat dark honeycomb and dark capped honey?

It should be safe to eat dark honeycomb that is dark in color only because of time in the hive. Personally, I would not consume black comb. Once the honey is extracted it should be okay. However, in the case of eating raw honeycomb, a lighter variety might taste better.

How long does it take comb to turn dark?

The time required for beeswax to turn dark varies. Most beekeepers aim to replace their brood honeycomb every 4-5 years.

Will honey harvested from dark comb be darker in color?

Not in general, but if a light variety of honey is stored in dark comb for a long time – some staining can occur.

What to do With Your Old Brood Comb

Once the wax has reached the stage of being black comb, it is not good for many things (in my opinion).  A hobby beekeeper probably lacks the tools or chemicals necessary to bleach the wax.

If you melt down old comb, very little wax is actually produced and it may be very brown. There are some crafts where the color of beeswax is not very important.

Homemade fire starters are fun to make and give and the color of wax is not important. While you can use pigments to color wax, I do not think old dark comb is good for candle making projects.

If you plan to use coloring agents for your wax project, you could use darker beeswax for projects such as making soy wax tarts or similar.

The best use I have found for this old dark honeycomb is to use it to attract bee swarms to my traps.  The scent present in this old wax is very attractive to scout bees.  And if the frame is destroyed by wax moths – you really haven’t lost much.

Keep your bee colonies healthier and productive by giving them a couple of fresh frames to work when the comb in the hive is very dark. 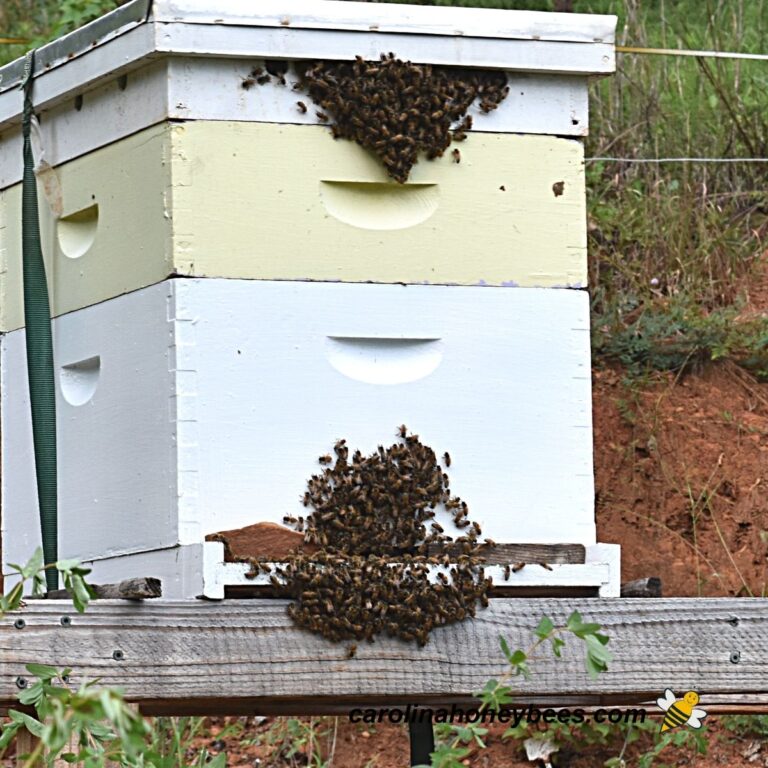 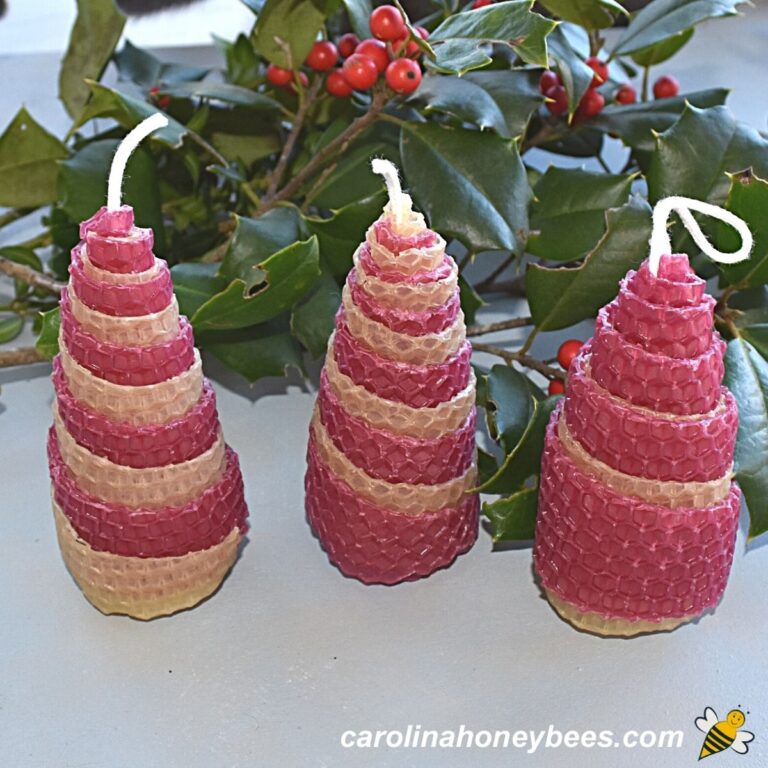 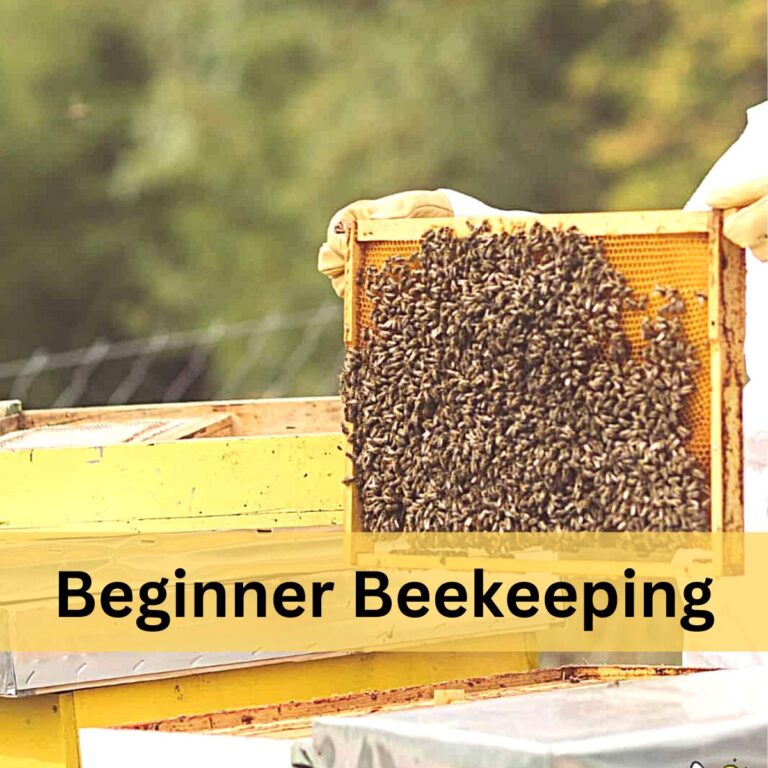 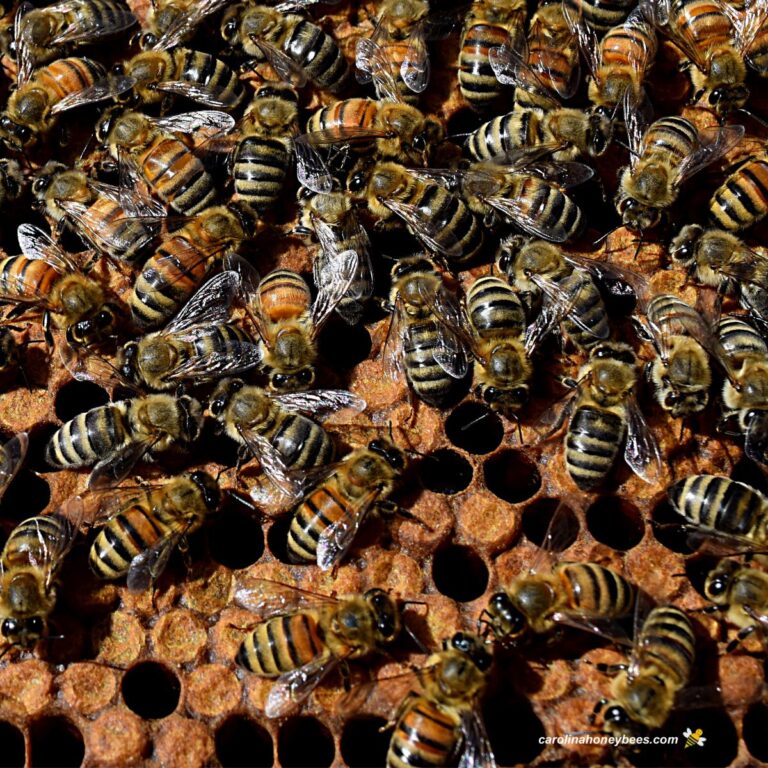 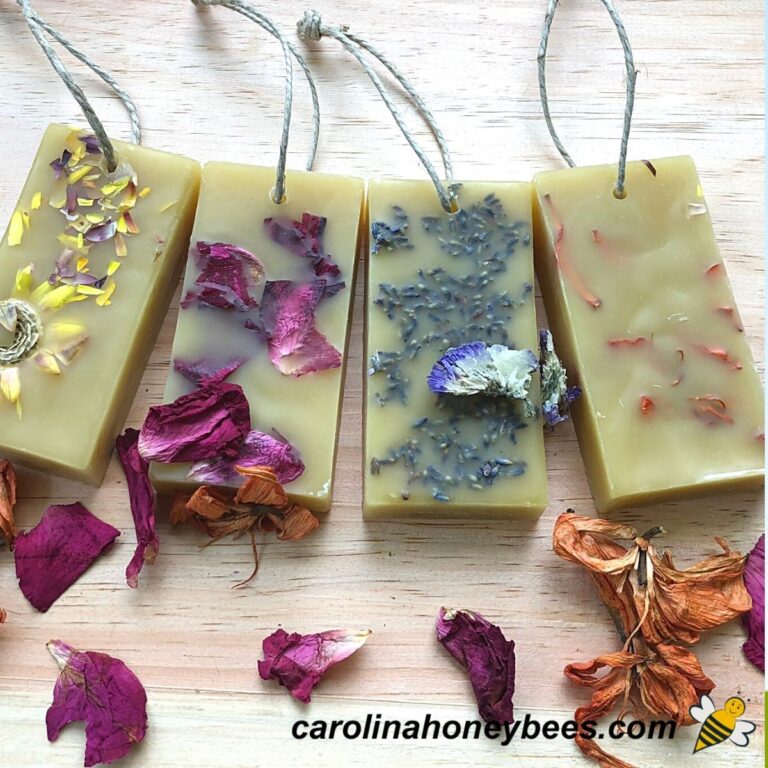 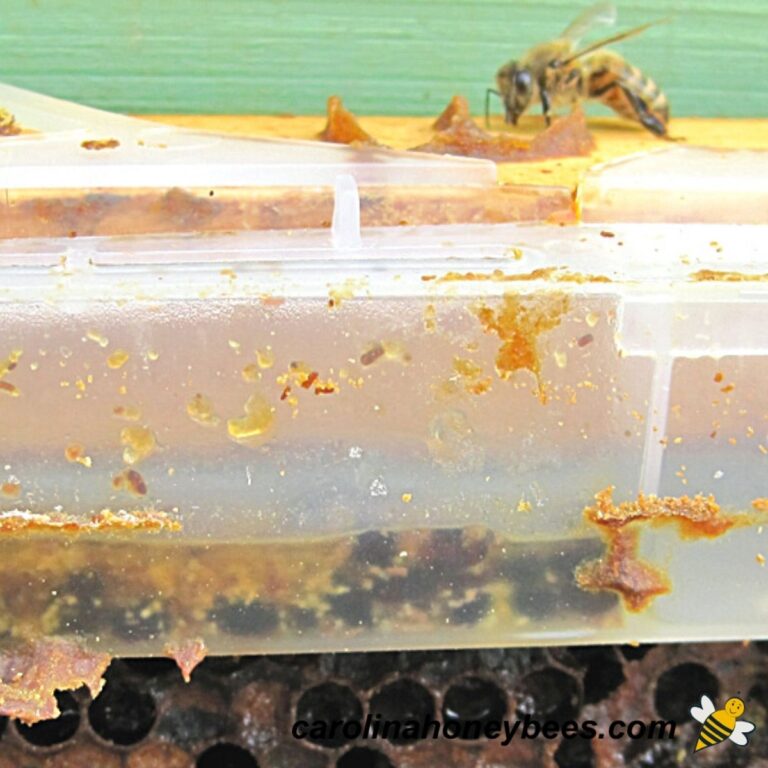