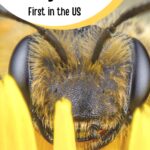 While there is only one species of honey bee in the United States, you can find many races.  They are all able to interbreed producing many different genetic lines. Those available for beekeepers to purchase vary over the years.  The needs and desires of the beekeeping community determine which ones are promoted.  A honey bee that was once prevalent in the US is the German Black Honey Bee.  They were the foundation of beekeeping in America.  Today, they are almost non-existent.

The dark bee of Northern Europe originated in Southern France. From there, they extended into the Northern and Eastern regions of Europe.  Also, called the German Black Bee, their scientific name is Apis mellifera mellifera. These insects have a dark abdomen and thorax.

Keep in mind however, we are not really referring to the color of the honey bee but rather the genetics.  Not every dark bee is Apis Mellifera mellifera. Those with Carniolan and Russian genes tend to be dark also.

Their journey to America was likely thanks to early colonists.  Hives traveled the ships to make the journey to the new country.

Colonists wanted the products that bee colonies provide.  Honey and beeswax are valuable resources that have many uses.

Even these colonial beekeepers understood the value of bee pollination.  More crops are produced in orchards and vegetable gardens with a beehive nearby.

The traditional bee hive skeps of straw transition into log hives and various styles of wooden bee boxes in the new world.

There are no native honey bees in the US.  But, beehives were established in the area of Virginia as early as 1622.

The Black Honey Bee did well in the New World finding ample sources of pollen and nectar. Like all healthy colonies, they swarmed forming new feral colonies.  For over 200 years, they expanded across the US.

They were the only bees available for beekeepers until the mid-1800’s.  At this time, Italian bees were imported. If we already had honey bees, why import more?

Each type of honey bee has certain genetic traits. These tendencies include: defensiveness vs calm, good honey producer, swarm prone or less likely to swarm.  All are important to beekeepers in terms of hive management.

The German Black Bees were known to be rather fierce individuals.  They were runny on the comb, prone to stinging and very defensive.

For beekeepers needing to work their hives, the idea of having a hive easier to manage was appealing.  Hopefully, both being European Honey Bees, the Italians would benefit the gene pool.

Being of the same species but different race, the Black and Italian bees were able to interbreed.  Unfortunately, when the black bees interbred with others – the resulting hybrids tended to be even more defensive.

Today selective breeding of honey bees is still underway.  Researchers hope to develop a bee with superior traits.  Calmness, honey production, mite resistant – we hope for the best of everything.

Over time, we have reached the position we find ourselves in today.  Unless you buy bees from a special breeder, you have “mutt” bees.

They are a combination of many different races and strains of genetics that have been brought in to the country.

What Happened to Black Bees

As beekeepers bred for desired tendencies, fewer of the original colonies existed.  Primarily, they only survived pure in remote locations where feral colonies had no outside genetics.

However, when varroa mites arrived in the US during the 1980’s much of the feral population was lost.

Today, a beekeeper is unlikely to find the original German Black Honey Bee living in the United States.

However, that does not mean they are completely gone.  Their genetic contribution still exists as noted by genetic markers found in lab tests. (Schiff el all 1992).

For many older beekeepers, the idea of those old-timey colonies is appealing.  Some report that they were heartier, better able to over-winter and more productive. Were the black honey bees better?  I’m not sure.

Though definitely a hearty insect, they were more susceptible to European Foulbrood.  Also, they had a greater tendency to be bothered by wax moth infestations. And don’t forget their sassy attitude.

Perhaps, those better days of beekeeping were not just about the genetics of the German Black Bees.  It was also a pre-varroa time in beekeeping.  I can’t even image how wonderful that would have been.

While we do have darker colored bees today, they are not the same as the original colonies. If your heart still yearns for the dark bee experience, we do hear of some feral colonies in remote areas.

These may still retain a lot of those early genetics. Do they really exist or is a similar to sightings of Big Foot? Maybe they are there and maybe not.