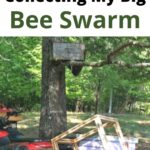 Most beekeepers will experience having a swarm move into a bait hive at some point. We are not always lucky with traps and boxes – but sometimes things work out well. This is a true story about my favorite bait hive and the excitement I experienced one Summer. Collecting a large bee swarm from this bait hive was awesome. It was my first big experience with a swarm of honey bees .

My Bait Hive Bee Swarm – One That DIDN’T Get Away!

Picture the scene…. this was a few years ago and I had been keeping bees for a few years. It’s a hot South Carolina Summer, is there any other kind?

My bait hive consisting of an old unpainted hive body has been sitting on a tree limb about 50 yards from my bee yard for a couple of months.

How I Set Up My Bait Hive

Inside the box (with a nailed-on plywood bottom and attached wooden top with screws for easy removal), I have only 2 frames – both with some old wax on the sides.

There was no particular reason for choosing these frames, they were handy and had some “comb smell” on them.

The bait hive is about 7 feet off the ground. This is rather low as most sources suggest higher placement.  However, I have to be able to get that thing down!

A bait hive that is successful at catching a bee swarm can get very heavy- very fast.  I constantly check my bait hives and remove the bees as soon as possible.

After trying to move a heavy box full of bees down while standing on the ATV, I decided to not let things get that far again.

Important Considerations in Setting Up My Bait Hive

My Favorite Swarm Lure to Use

A purchased swarm lure had been put in the hive in early March and I also sprayed some liquid Swarm Commander around the front – having received some as a sample.

Over the next few weeks, I would walk by the trap at least once a week. Last weekend, I had noticed some bees investigating the box.  GREAT .

These were scout bees.  Scouts will go out looking for suitable homes when a colony is preparing to swarm.

Using some mysterious method, the majority of scouts will decide on a location.  Once this happens, the swarm will take flight and fly to their new home.

Many books have been written on bait hives and swarm traps. You will find a lot of conflicting information but don’t let it discourage you. It shows that there are many ways to be successful with bees.

Why Beekeepers Want To Catch Swarms

Do you want to attract bee swarms from your own hives or others ? Both actually. I try to manage my hives to avoid as much swarming as possible – especially during the honey flow.

But, when they do swarm I certainly prefer to catch them before they get off the property.

And if I catch a swarm from a feral (wild) colony or someone else’s hive – that is great too ! Set your traps up early, colonies start to grow with the early nectar flow.

A Sense of Excitement Around The Bait Hive

Excitement was building as I saw scout bees inspecting my hive last weekend.  Each day I walked out hoping to find new tenants in my box.

However, I was held in suspense by the continued presence of more and more scout bees but no bee swarm.

I told my husband, “I’ll be surprised if I don’t have a swarm in that box sometime next week”.  We  had unseasonably warm days during this time in upstate South Carolina.

Swarm Moves in My Swarm Trap

One afternoon, I arrived home from my part-time job-  tired and looking forward to an evening of knitting and watching TV.  Hmm, better walk out and check that bait hive first.

I stroll out across the pasture (the goats go along for company), as I grow closer to the bait hive, I see a black curtain over the front. I think – WOW some type of plastic trash has blown over my bait hive.

A few steps closer reveals that the black curtain is NOT trash – it is a huge wall of bees.  I spin around (scaring my goat company immensely) and sprint back to the house for my Nikon.

I have never seen such a large wall/wad of bees on the front of a box. A swarm had just arrived and it was a big one.

The entrance hole was almost covered.  How long had they been there ?  How many bees were inside ?

It seemed that as many bees were coming out of the entrance hole as were going in.  I had a decision to make.  Normally, it is a good idea to leave a swarm in the bait hive for a few days. But….

If a very large swarm tries to occupy a box too small they will often leave the next day.

At the risk of doing the wrong thing, I could not do nothing.  I had to get these bees down and in a permanent box.

Collecting the Bees Out Of The Bait Hive !

I stopped by the bee yard and took 1 shallow frame of brood (baby bees) from a strong nuc colony.

Swarms will not usually leave brood even if it is not their babies !  So I hoped this bee brood would encourage the swarm to stay even though I am interfering with them during the move.

A stand is set up near the bee swarm with the new hive body.  I am unable to shake the swarm down as you would on a tree limb.

I grab the back of the hive body (with bees) and try to gently lower it.

This process works  “somewhat” and I get the hive down but some of the large mass of bees drop off on the ground (oops I hope the queen was inside the box).

I pour a large amount from the bait hive face into the open hive.  If I can get the queen in the new box, the other bees will fly to her so that is my goal !

Finding The Queen Bee in a Swarm

I am lucky enough to see the queen (assuming there is only one – there could be more)  and she is unmarked.

Since all of my queens are marked – this is a GREAT DAY indeed as I have just caught a major bee swarm that most likely did not come from my hives.

Can you say, ” Free Bees” !  Oops, a large glob of bees fell off the hive onto the ground !  No worries if the queen is already in the new box, these workers will smell her pheromones in a few minutes and join her.

Success I Have The Queen Bee

We have success.  Workers are entering the hive. I will put the telescoping top on the hive and band it closed with a strap to hold all the hive parts together.

Leaving the front open, will allow the bees outside the box to located their sisters and join the colony.

Once dark has fallen, I will transport the box back to my bee yard or apiary, placing some tree limbs or tall grasses in front of the hive entrance.

When morning comes, bees leaving the hive will realize they are in a new location and get to work building the colony.

Normally I would always feed a swarm (and you should – always !) but we are having great weather and plenty of bloom so I have decided to leave them alone until tomorrow.

Then I will evaluate the colony and possibly add a feeder to help them get off to a good start.

Whew…. so much for a relaxing evening. 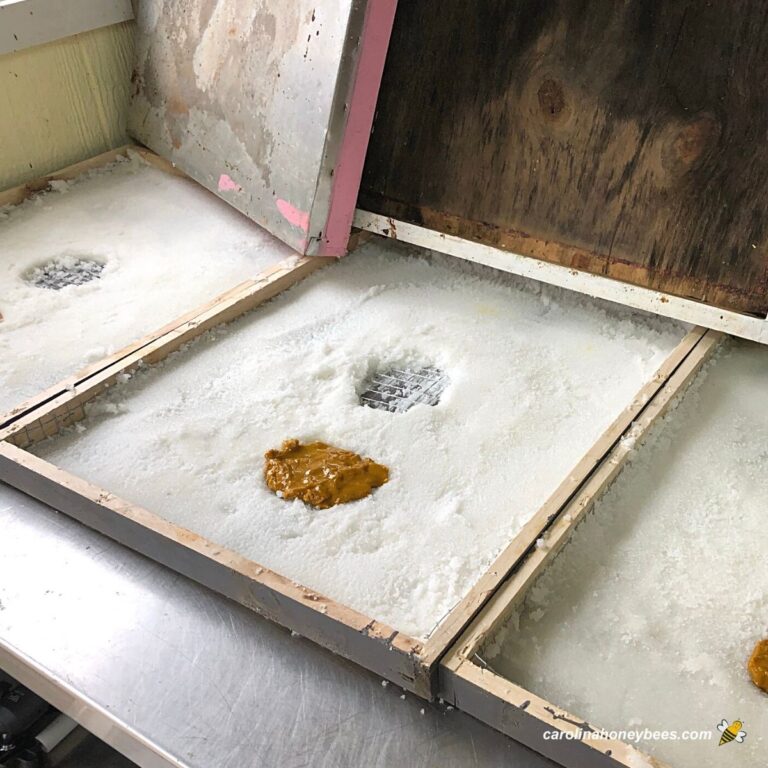 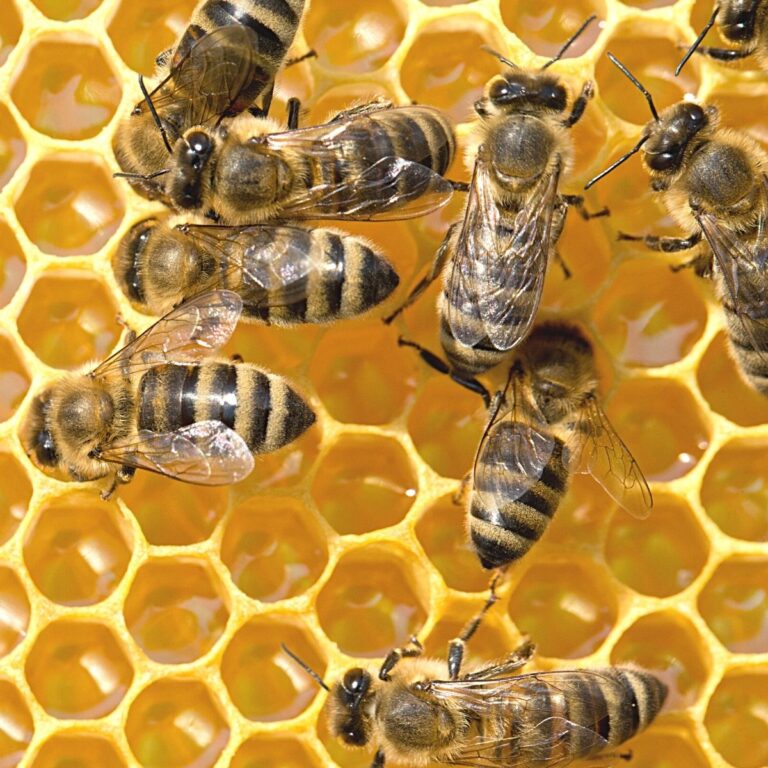 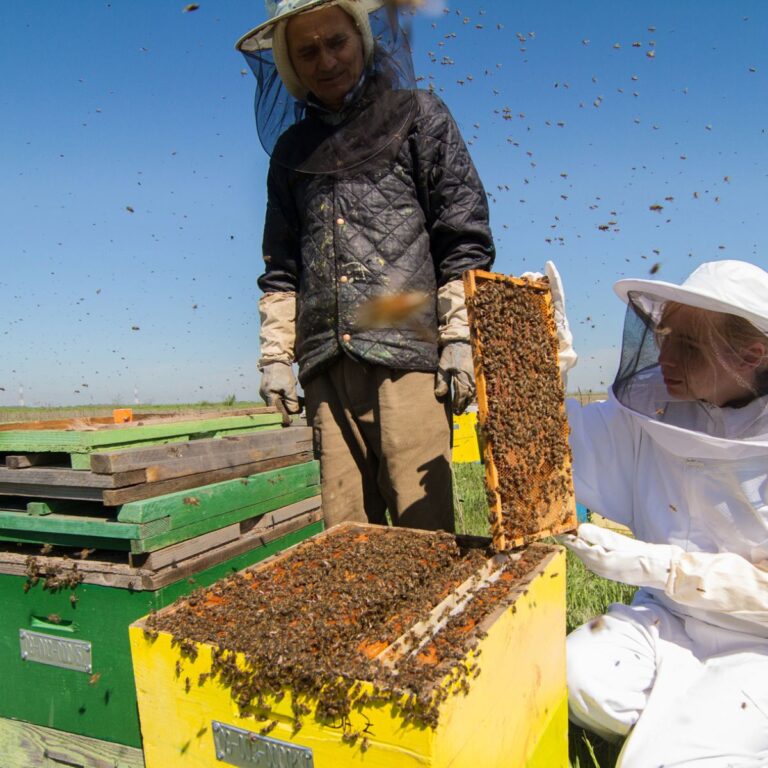 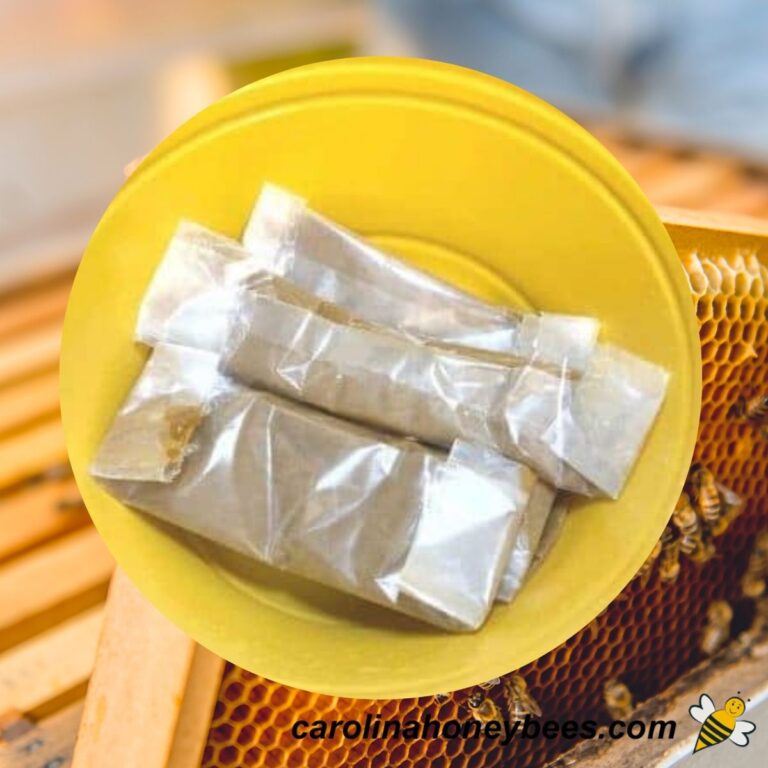 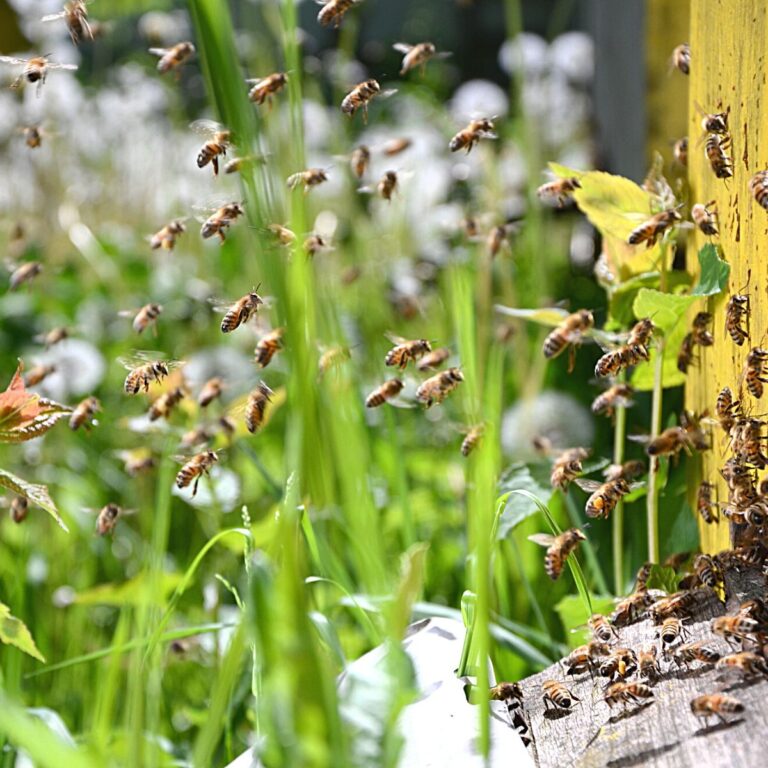