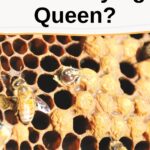 One of the most important factors in colony strength is having a good queen. Routine hive inspections should reveal mostly worker brood. Some drone brood is normal during the warm season. Finding all drone brood and no worker brood is not good. You might have a drone laying queen – it is time for action.

A well mated queen can produce thousands of eggs a day – until the semen stored inside her body runs out. Seeing only drone brood is a serious issue. It tells us that eggs are being laid but no female workers produced.

Drones are important to the colony but thousands of workers are needed to keep the colony functioning. They are the ones that go out and collect the resources needed for the colony – and take care of all the work inside too!

If the season is warm and food is available, eggs are being laid in cells prepared by the workers. These eggs become bee brood and most colonies have some of each type of brood during the warm season.

Your queen bee is the most important individual in the colony. She is the only member capable of laying fertilized eggs that become workers and unfertilized ones that are drones.

Beekeepers always strive to keep their colonies “queen right”. What does that mean? It means that your colony has a good queen that is performing as she should.

What is Drone Brood?

Drones are male bees.  They do no work inside the hive. Their role in the colony is to leave the hive and mate with virgin queens.  In this way, the genetics of the hive are spread.

Amazingly, a queen can choose whether or not to fertilize the eggs that she lays. When a queen lays an egg and does not fertilize it with semen stored in her body, it will develop into a drone (or male bee). Fertilized eggs develop into worker bees.

Looking inside the honeycomb cells of the brood nest, to the untrained eye – drone larvae doesn’t look much different than worker larvae.

When bee larvae are ready to pupate,(make the transition from larva to adult)  worker bees cap the cells with a wax covering. At this stage, it is much easier to distinguish drone brood from worker brood.

Worker brood caps form a smooth pattern that is slightly raised from the surface of the comb. But, drone brood looks different.

The capped cells of drone brood will protrude slightly from the honeycomb surface.  This creates a bullet appearance. In most cases, the bees have drone brood grouped together along the edges of the brood nest.

Drone brood is not a bad thing. But, a colony only needs so many drones during the warm season. If drone brood is the only thing you have – that’s not good.

Either you have a drone laying queen or laying workers. Both situations require help from the beekeeper if the colony is to survive.

Timely hive inspections are an important part of managing honey bees. Perhaps, the most important aspect is to verify the hive’s queen status.

It is not enough to just see her in there. We need to know that she is capable of producing workers. The best way to evaluate your queen is to look at the brood pattern.

Learn how to recognize a good brood pattern? This takes a bit of experience but you want to see compact sections of mostly worker brood.

Worker brood is a smooth expanse of capped cells (or larva).  You may notice what looks like a pattern on the covers of capped brood. This is normal and no cause for concern.

Brood should be placed together in a general area. The brood nest often occupies several frames in the hive.

Tan is the common color for capped cells because the bees re-use valuable beeswax for this purpose.  A few empty cells is no problem. As the colony grows in population the brood nest area grows too!

How much brood should we see?  Well, that depends. During late Fall, very early Spring or times of nectar dearth, you may not see a lot of brood.

If it is a time of colony build up with ample food available, lack of a good solid worker brood pattern may mean trouble. There are usually two possibilities for this issue:

Though it is often considered a problem for older queen bees, that is not always the case. Why would your nice fertile queen go bad?  Well, even a young queen bee can run out of stored semen.

In bee reproduction, the young queen bee mates with several drones. Semen (sperm) are stored in a special organ inside her abdomen.

When the semen supply is exhausted, she will be unable to fertilize the eggs that she lays.  Now she is…. you guessed it – a drone laying queen.

It is not uncommon to receive queens that are not well mated.  This is especially true in early Spring when bad weather makes mating more difficult. No one can really look at a freshly mated queen and know what her potential is.

When the queen bee begins to fail, you may find large sections of drone brood. Instead of it being mainly along the edges of the frames, the brood might be scattered across or in a tight pattern.

Also, these bullet shaped cells protruding from the honeycomb will be found in worker sized cells. If the queen is laying and trying to fertilize the eggs.

If the colony is completely queenless due to queen death, the bees will try to make a new queen. But, they are not always successful.

Some of the worker bees will begin to lay eggs if a colony remains queenless (or without worker brood) for a long time. This usually happens after 2-3 weeks.

Workers bees can not mate – only drones can be produced from their eggs. We call these individuals “laying workers“.

Laying workers (drone layers) continue to produce drones until the colony collapses.  They can not make a new queen with no fertilized eggs.

Note: Some beekeepers will refer to the laying worker as a drone layer (and that’s true) and sometimes the term drone layer is used in reference to a bad queen honey bee.

How do you know if you have a drone layer queen or laying workers? We all know it is not always possible to find that elusive queen bee.

Drones brood produced by a queen tend to be grouped together – in patches at least. Workers that are laying tend to scatter a few eggs here and there. And, they often lay more than 1 egg in each cell.

Laying workers do not have the long abdomen of a queen.  They deposit eggs on the side of the cell wall instead of centered in the bottom.

How to Save a Colony with a Drone Laying Queen

There are several different ways to deal with a drone laying hive. The one you choose depends on your preference, the current condition of the colony and resources available.

Any colony that has only been producing drones for a while will be low on worker population. If you catch the problem while the bee population is still good, you may be able to purchase a new queen for your bees.

After requeening the hive, check back in a couple of weeks to be sure the new queen is accepted and laying.

Give the Hive Resources to Make Their Own Queen

In the warm season, there is another way to fix a drone laying queen problem. This is the advantage of having more than 1 beehive – you can share resources.

Remove the poor queen from the hive and give them a frame with fresh eggs. Or very tiny larva – worker brood. This allows the colony to make a new queen for themselves.

This only works well if the problem hive has a strong population of bees. If the colony has been in trouble for a while – giving them eggs to raise a new queen is not as likely to be successful.

Combine the Drone Layer Colony with Another

One of the easiest ways to get a drone laying queen hive back on the path to success is to combine it with a good hive.

A honey bee colony full of drones is running out of time. Yet, if the hive still has a fair population of bees – perhaps they can be saved and become part of another productive colony.

In situations where no queen is available to purchase and no frame of bee eggs is available, combining may be the only option to save a failing colony.

No matter why it has happened, a drone layer is a death sentence to the colony-without beekeeper intervention. Colony size will decrease until pest, disease or robber bees cause the colony to collapse.