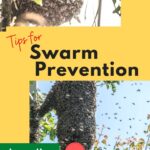 Colonies of honey bees go through population curves. The number of bees in the hive builds up and then to relieve congestion, a swarm may leave. Beekeepers often invest a lot of time and effort in trying to control this natural impulse. A common lament is “how to stop my bees from swarming.” Is it possible to completely control swarming? Not always but with some special techniques you may be able to at least, slow things down.

Though they can occur at any time during the season, Spring is the natural boom time for swarming bees. Flowers begin to bloom and colonies that have lived through Winter start to grow in population.

The season of hope and possibilities as beekeepers everywhere look forward to strong hives and a good harvest. However, swarming bees can be a problem and put a dent in your harvest.

Catching a swarm (especially one not from your own apiary) is a fun experience. Having more colonies is great but a colony that “throws” a swarm – does so at a cost.

Colonies that swarm often produce less honey (or no excess honey) for the season. You see, the life’s goal of the honey bee colony is not to produce honey for me and you. Not by a long shot!

A honey bee colony works to make enough honey for winter survival and to reproduce or form more colonies of bees in nature.

It is the lucky beekeeper who is able to catch a bee swarm from a low hanging branch. Or maybe they will go to a nearby swarm trap that you have.

But, they may also take off over the hills never to be seen again.  A swarm in the box is worth 2 in the bush. – Literally!

When Do Bees Swarm?

The honey bee colony can swarm at any time during the warm months. You may even have swarms from your hives in Fall. However, Spring is the time that most swarms happen, in my region April-May.

Colony population builds quickly on fresh incoming nectar from the nectar flow. With more and more bee brood being produced, it gets crowded in the hive. T

he queen finds fewer places to lay, swarm preparations may begin. It seems as if the honey bee colony knows – now is the time.

How to Tell if a Hive is Going to Swarm

Beekeepers are often surprised to see a swarm leaving one of their hives. And yes, while they can surprise us there are often swarming signs to look for.

This is your best hope for controlling swarming in your bee yard. We need to catch the swarm before the bees get too far along in preparations.

Any strong colony is a candidate for a swarm. However, the Spring beehive needs a closer look for any signs of queen cells.

Don’t confuse queen cups with queen cells. Seeing the acorn sized cups with no egg or bee larvae inside is not cause for concern.

The presence of multiple queen cells in the hive – especially along the bottoms of the frames is a sure sign of swarm preparations. Always handle a frame with a swarm cell gently until you understand what it happening in the hive.

There are some things to look for other than queen cells but they are often difficult for a new beekeeper to identify. Seeing a slim queen that was plump and fat last week is a signal.

Also, fewer eggs being laid – even though you know plenty of nectar and pollen is coming in. This signals that workers are focusing on preparations to leave more so than colony build up.

One of the easiest caution signs is overcrowding in the hive. Lifting frames from the brood and and every possible space is filled with a bee. They may even appear to drip or flow from the bottom of the frame.

Congestion in the brood nest along with no room for egg laying combine to create a perfect condition for a swarm.

There are many practices used by beekeepers to attempt preventing or controlling swarming behavior. They do not always work.

Each colony is different due to the genetics of the bees inside. However, over the years all of us have tried some of the techniques.

One of the most common conditions that trigger swarming is congestion (or perceived congestion).  We are talking about crowded conditions in the brood nest or young rearing area of the hive.

Perceived congestion occurs when the bees fail to spread out and make use of all room in the hive. The colony may have any empty super of comb on top.  But, they will feel crowded if they fail to extend the brood area.

That is why adding bee boxes does not always stop bees from swarming. Especially once you see the signs of swarm preparation – adding another box may be too little too late.

Give the Strong Colony More Space

This honey bee swarm prevention technique relies on action by the beekeeper before the swarming impulse is initiated, otherwise this method will not work. If you see that they are becoming crowded inside – add another box.

Especially frustrating for a new beekeeper, a super box with foundation is not as effective as drawn comb.  But, you have to use what you have.

It is not enough to simple put another box on and walk away. You will still need to inspect the brood nest weekly for signs of crowding or queen cell development during the Spring swarm season.

Providing enough space can be a problem for those keeping bees but do not wish to harvest honey. Likely your strong colonies will swarm – the best you can do is either catch them or wave goodbye.

Opening Up The Brood Nest

A more advanced method is to manipulate frames in the brood section within the colony. The beekeeper spreads out the frames containing young – making the “nursery area” larger.

The brood area is “opened” by adding a frame of drawn comb between two frames of brood. Even a couple of frames can make a difference. The removed frames are placed in another colony that may not be as robust.

This is another advantage to starting with at least two hives. You have options for sharing of resources according to the needs of the colony.

This method can be successful, however there are risks involved – especially if the weather turns cool.  You may end up killing brood because the bees can not cover them during the cool nights.

I have used a similar method where I will equalize my colonies. Moving a couple of frames of capped brood from a crowded colony and replacing them with empty drawn comb.

The removed frames of capped brood are sprayed with a little sugar water and given to a weaker colony. This method has worked well for me – if it is done early-before the bees are in swarm mode.

Similar techniques of opening up the brood nest include: the Demaree Method and Checkerboarding.

A beekeeper using this method should be experienced to prevent causing bigger problems. This method requires proper timing and enough nurse bees to keep all the young warm and fed.

Colonies with older queens are more likely to swarm than those with young queens. For this reason, many beekeepers re-queen their colonies each Spring.

The odds of preventing a honey bee swarm improves with a young queen in charge. Most likely this is due to the diminishing pheromones (chemical messenger) levels in old queens and reduced egg laying.

A well-mated young queen will have good pheromones to stabilize the colony. But, no colony member lives forever and even the queen bee will reach the end of her life cycle.

It is a popular technique among  beekeepers to cut out queen cells to prevent swarming. This is only a delay tactic and is often a very poor honey bee swarm prevention plan.

Queen cells are not all large and easy to find. If you miss even 1, the hive will still swarm. And if you do cut out all the queen cells? The colony will select more young larva and begin the process again.

It does work sometimes. This tactic may keep a colony from swarming until their reproduction urge subsides.

However, you must get every queen cell. And, NEVER cut out queen cells – unless you KNOW the old queen is still there!

Some beekeepers cut a queen excluder into a piece small enough to go over the hive entrance. The idea is to keep any possible swarm inside the hive.

This is not really a good strategy. Sometimes, the slimmer down queen can squeeze through and drones can not come and go from the hive.

Perhaps, a suitable emergency procedure if you need to work and can’t manage your hive until the evening. But, I would not suggest this as a good management technique.

One of the most useful techniques for prevention of swarms is splitting a hive. There are several reasons that beekeepers make employ hive splitting in the apiary but swarm control is a common one.

In this process, the beekeeper splits a large colony into 2 smaller hives. Using all the extra equipment needed, the resources of the colony are divided between 2 boxes.

One hive will get the old queen and the other half will get a new purchased queen, or a couple of queen cells from the crowded hive. This gives them the opportunity to have a queen for their family.

The reverse method works when swarm season is over. If you have several small colonies, perhaps you can use newspaper to combine them back down to a few strong hives before Winter.

Sometimes you can wrestle nature but you can never beat her. Many volumes of books have been written on bee swarming. To detail the numerous strategies are well beyond the scope of this article.

If your bees swarm (and you did not want them to), you have not failed.  Laugh it off and move on – they are being – well… bees!

Devise a swarm control plan, work your plan and then accept the fact that honey bees are wild animals (ok insects). You can not completely control bees.