Anyone who does not like getting “free bees” raise your hand! Ok, any beekeepers out there who are trying to catch bees in a honey bee trap? Many of us are successful and you can be too. But first, you need to get your honey bee trap in place and maintain it.

A honey bee trap can be made from many different materials. They are also referred to as “swarm traps” or “bait hives”.

One of the most common ways to catch swarms is using old beekeeping equipment.

If you are a beekeeper wanting bees or someone considering beekeeping, you may want to set up a trap of your own. One of the most exciting parts of beekeeping is catching swarms.

Honey bee swarms don’t always choose to go into provided boxes. Often, a beekeeper will find a swarm of bees hanging on a low limb of a tree. These are easily gathered.

But, the swarm can also be hanging in the highest branches of the tallest tree around.

This is why I always have a bee trap near my bee yard. And I will check the trap from time to time for success or problems.

What is a Honey Bee Trap?

This is the term used to describe any man-made structure that is intended to catch a honey bee swarm. Commercial traps are available from beekeeping suppliers.

They come in various sizes and materials. We beekeepers make homemade ones from many things found around the farm.

The most popular type of bee swarm trap is made using an old hive body. This would be a box that has contained bees in the past.

If you have been keeping bees for a few years, you probably have one of these laying around.

Are you a new beekeeper? Ask around and you should be able to find an experienced beekeeper who would give you an old hive body or sell it really cheap.

Yes, they do. Swarm traps can be very successful at catching swarms. And sometimes, you can catch more than 1 swarm in the same trap during the warm season.

However, no trap will catch every swarm of bees. I still have swarms that decide to go out on their own instead of using the free apartment I have fixed for them.

If the scout bees find a location better than what you are offering – the swarm will go there instead.

My swarm traps (or bait hives) have all caught swarms at various times.

Maintenance of Your Honey Bee Trap

When my very best trap failed to attract a swarm 2 seasons in a row, it was time to investigate.

This trap had caught multiple swarms each year.  Something had changed. But what?

The location had not changed. I could not see any difference in the outside of the box and it still had a nice bee smell.

But obviously, it was not as attractive to bee scouts any longer.

Closer inspection revealed that the wood on my box had deteriorated well past the point of fixing. A family of termites had even moved in.  This was a problem.

A few nails to make the box components fit tightly was no longer going to repair my best swarm trap. It was time for a replacement.

I wanted to put another in the same place because it had been a good location for so many years past.

Equipment overload can be a problem for those of us with many hives.  Surely, I had something that would work.

After digging through my old bee equipment for about 30 minutes, I found an old hive body.

It was one that my Dad had made into a swarm trap for me. He has been gone for several years now. I thought what a great idea it would be to use this box.

Because Dad was not really a beekeeper, I did need to tweak a few things.

The ideal opening size for a swarm trap is a hole about 1” in diameter. Dad had made a much smaller entrance so I had to enlarge it a bit.

After tightening the box with some new nails and drilling a larger entrance hole, I was ready to go.

You can do the same and make a bee trap for yourself. Find an old hive body, nail on a bottom and attach a removable top with screws. Drill a hole in the front near the bottom.

Switching out the Old Swarm Trap for Another

First, I took the old box out of the tree.  After removing the top of the box ( a regular top cover is used for this one), I see termites have taken up residence in the wood.  Yes, it is time to replace this bee trap.

Each swarm trap that I use has a few frames inside with a bit of old dark honeycomb.

The comb smell aids in attracting swarms. And, it is no great loss to me if wax moths or other pests destroy it.

I have better results with this setup.  However, you have to monitor the trap closely and move the swarm to a permanent hive soon after capture. Otherwise the bees will fill the box with comb built everywhere!

Some beekeepers prefer to fill their traps with the total number of frames possible.  That is a perfectly fine way to proceed as well.

And, is the best option if you are not able to check your traps daily.  There are many different ways to entice bees.

Once the 3-4 frames are lightly nailed in place, my special inner cover is screwed on.

I have a strip of beeswax on the underside of the inner cover.  The bees often start to build their comb here instead of in the frames – that’s okay with me.

Once the top is secured, the trap is returned to the original location.  This has been a great spot to catch swarms in years past.

Hopefully, replacing the former box with a better quality one will please the next bee swarm. You can put up a trap or bait hive at any time during the bee season.

But, it is a good practice to have your honey bee trap in place by late Winter.

This gives scout bees plenty of time to find them and hopefully choose them for a new home.

Lure the Bees to Your Trap

I use a piece of old honeycomb to attract bee swarms to my bait trap. But sometimes I use commercial lures too.

You will find different types and formulations available for purchase. 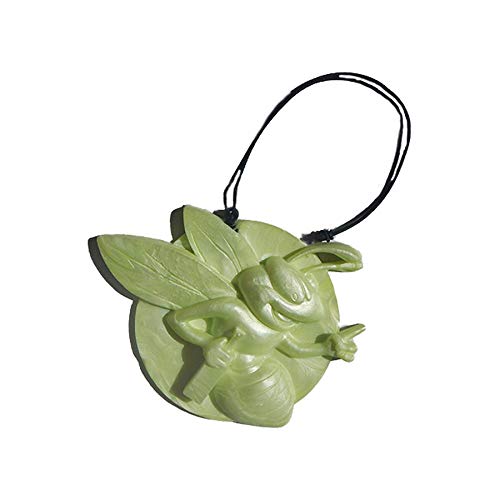 Swarm Commander is currently my favorite swarm lure to use in my boxes. A swarm lure will not cause your bees to swarm.

It will only intrigue scout bees to visit from hives that are already preparing to swarm.

If you have a honey bee trap or bait hive that used to be successful but no longer works – try to find out what has changed.

The actual trap may not be the problem – you may just need to move it to another location.  But, if the box has deteriorated, a new “old” box may be just the thing.

And, swarm traps don’t always work – don’t be afraid to experiment with different styles and locations.

Some types of bait hives work better in different regions of the country.  Find out what is used by local beekeepers in your area.  Just don’t give up!

Swarm Trap Set Up and Check
Next Post: What to do With a Fall Swarm of Bees?